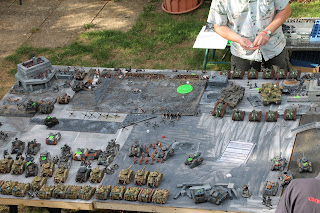 As the Armageddon Steel Legion are torn apart by the defenders, the 20th DKK push up behind them but their advance is constrained by the wrecked vehicles in front of them.  The Adeptus Mechanicus came on and repaired one of the Cadian 144th's scout cars. 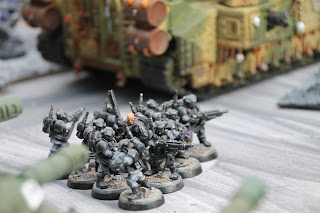 Corbanian Special Forces behind the enemies front line finally manage to seriously damage one of the pair of Baneblades that bolster their front lines and prevent a decisive breakthrough in the center. 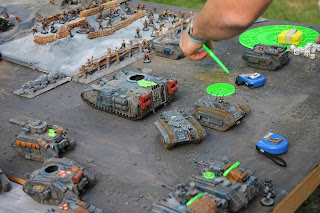 As an interesting couterpoint to the Corbanian Storm Trooper's actions inside the fortifications, stay behind Chimeltavets from the Devos IV 1/1 Special Forces, in vehicles almost identical colours to the Corbanian ones, are allowed to close with the Hellhammer with devastating results.  They would remain in situ, protected by constant bombardments from Bloodcoat Thudd Guns and mortars, defying the efforts of Corbanian veterans to dislodge them. 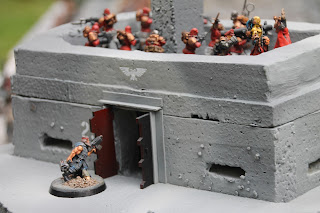 Private Corbo infiltrates the Command Bunker and manages to wipe out the Bloodcoat commander, his command team and almost all of the heavy stubber teams therein.  He was then ignominiously slain by the psyker on the roof.

There is not that much to add here in terms of editorial: the Flecktarn platoon that came on the left flank were seriously threatened by scouting sentinals from the Tigers coming on behind them and took a pasting from the mortar fire and the Heavy Stubber teams before Pte Corbo did his thing.  The Corbanians on the right flank were seriously inconvenienced by thudd gun fire which made their attempts at any infantry actions more or less ineffective.  On the plus side the huge number of tigers manning the barricades in front of them was being chomped through at an alarming (for Admiral Drax) rate.
Posted by Zzzzzz at 18:44