3* Gen Tolstoy demanded a number of officers from each of the units under his command and did most of the planning for the first year of the campaign with his Korps 'superteam' on the Ocean on their way to Benq. This is perhaps a major contributing factor to 17 Korps' success - all of the Divisional teams were aware of both the overall and the specifics of the other Divisional plans.

The effect of this mass-planning cross fertilisation C3 success may be much diminished by time, but the legacy of co-operation and consideration of the Korps when planning for their Divisions has persisted, with the custom and practice of the HQ being passed on as personnel are posted in and/or posted on. 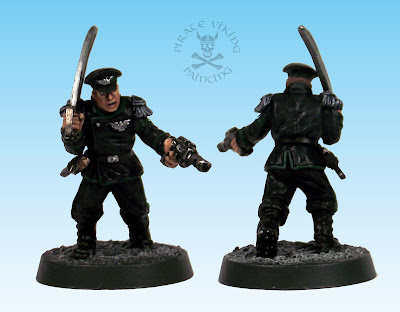 Lt Col Dalthem, in the uniform of a Volscarni Grenadier.  Lau Dalthem wears this uniform (which he is entitled to do, having served in a Volscani exile Storm Trooper unit as a platoon leader) with his tongue firmly in his cheek, given his current appointment as 902 Div's Intelligence and Security head.  Unsurprisingly for a frontline formation, his concerns are getting STAR information back from the units within the formation and the reports that come down from 17 Korps out to the units.  He can often be found tunelessly whistling hymns.  He does this as a sort of parody of Capt Edligu, but the good Captain either hasn't noticed or is too good mannered to rise to it. 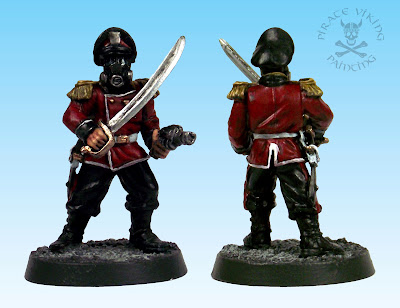 Captain Several Edligu is the Ad Mech liaison officer.  He cracks his knuckles, sometimes at the dinner table.  He hums, mostly hymns and religious songs, off key as he goes about his business. He is a religious man and a little perturbed by the interface between the God Emperor and the Omnissiah.  As soon as he thinks he'd reconciled it to his satisfaction, he learns something else about the Imperial Creed or the Ad Mech that sets his mind running.  However, he is by nature an academic and realises that differing sects know different truths.  He's writing a book about his experiences.  Being tone deaf, he has no idea that Col Dlathem might be mocking him. 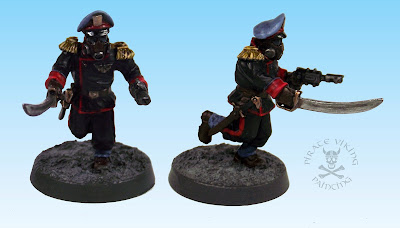 Lt Col Efloast Has, from the 7th Mordian Iron Guard is Commandant Welbahn's Chief of Staff; his job is to run the Divison's HQ, allowing the Commandant to command the Division unhindered.  He is an energetic and experienced infantry commander who is thoroughly enjoying his first posting to a non-Moridan formation.  He is finding that the whole thing is quite amazing and that he has such an important role keeps getting him up early to find out what the next challenge will be.  His enthusiasm and professionalism are infectious. 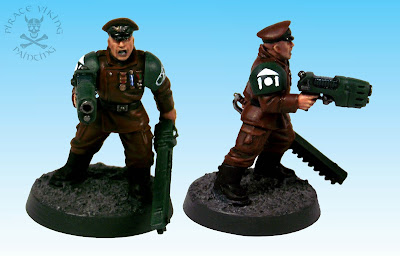 Captain Pasquilliano of the Cadian 127th is the President of the Officer's Mess Entertainment Committee.  As you can imagine, this involves arranging dinner nights, procuring suitable beverages, organising the occasional live entertainment.  But being a front line formation, there's not much of that sort of thing going on; supply of warlike material for the HQ is what he does now, Which he is finding both similar and different at the same time.  He has decided that caution is the better part of valour, hence the heavier than usual load out. "Be Prepared" has turned out to be a useful creed.  He wasn't best prepared for this job when he got it but has mastered his duties and incidentally accrued a large number of items of individual and unit kit during the course of his pressurised early months in post.  Being in a formation HQ has meant that he has been able to commit these items to storage amongst the more official paraphernalia.  One consequence of this is a reputation for being able to source 'things' amongst the senior officers of the Division - some of these he acquires as a part of his job and some are his largess from days when he used to have anything if it was not bolted down. 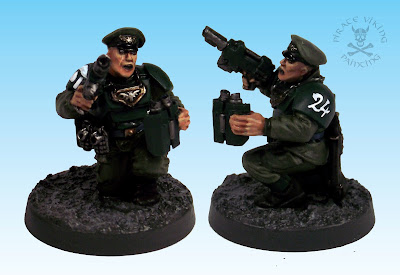 Major Speer of the Cadian 24th.  He is the Commandant's Artillery expert, drawn from 144 Fd Arty.  None of his fellow officers will play him at regicide any more.  The Officers in 24th stopped playing him at cards years ago.  Both of his brothers are in the regiment; after the Battles for the Nolag Heights, he will be the only one left.  But that is the nature of Imperial Service.

Maj Speer is a little deaf nowadays, but very professional.  And he is quite demanding of the artillery assets at his disposal - not afraid to praise or chastise as appropriate.
Posted by Zzzzzz at 10:39