I get by with a little help from my friends

So by prior arrangement Karitas and Admiral Drax came over to give me a hand.  The idea was "just" to line up my iggies.  That is all.  The gettin' em out and puttin' em away again took the best part of seven hours. 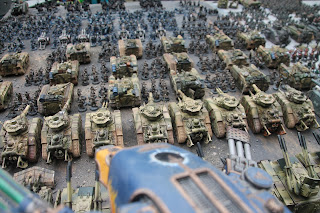 So these photos are just a tease.  Karitas brought his camera and his photography is soooo much better than mine.  But there are reasons for his super competence; I tried a 'fly by' with my DSLR, there's someone cutting their grass somewhere nearby and the background noise makes it seem like drone footage.  However, watching it back, you can clearly discern my footfalls from side to side.  So that's not being posted. 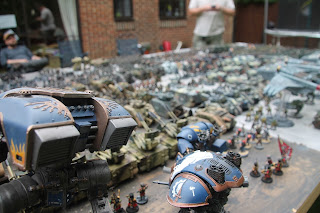 Whilst we were doing this, Admiral Drax was posting on a closed group on fb.  Which was almost instantly getting comments.  Mostly about my mental state, judging by his cackling.  Like it says in the title - three of us working for between six and seven hours could be twenty one hours - I'd not manage such a task in a on my own (and quite frankly, it would sap one's mojo in the end). 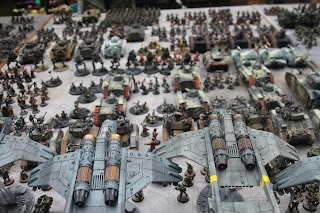 So here's some 'high level' airplane and titan level views from the back of the parade.   And the main purpose of this is of course to publicly thank Karitas and Admiral Drax for all their help; this would literally not have happened without them.  And the chances are, if you're reading this, that your continued support of this blog is one of the things that keeps it chuggin' along.  So thank you as well.

I hope this has wetted your appetite - more parade picts soon !
Posted by Zzzzzz at 21:38