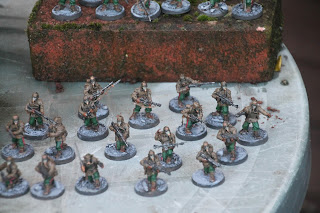 Here's some DKK as a Christmas treat before you get too mince pied.  You'll remember these, who turned into these.  Well, I managed to splash some paint on them 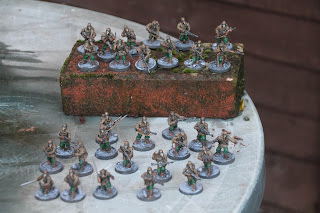 Their trousers are DA green, straight out of the pot.  Wow, that's bright.  Who knew ? And the undercoat is khaki, not white, although the VL resin is much, much, much paler than the FW resin. So maybe a black base coat would have helped here ?  Oh well, as you can see from the picts, they only look bright green when there's a lot of light shining straight on. 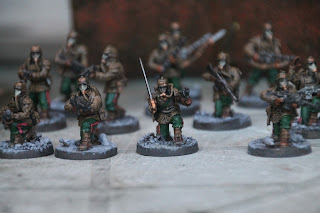 Arrgh !  I've just seen the bronze splash on the Jnr Officer's helmet.  Bugger.  But I do like these guys.  I wouldn't say that I enjoyed painting them (in one batch of 30) but did feel a sense of satisfaction now that they are so nearly finished. 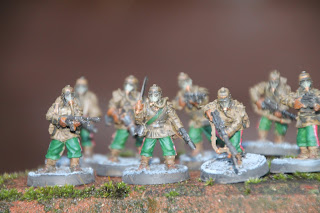 My normal trick of using tentacle pink as an undercoat for any red has worked nicely.  But.  On some of the boys, you can clearly see a pink edge to the red stripes.  Sigh. 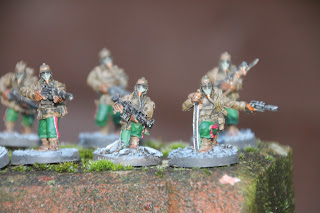 Setting aside the bestial brown gloves and boots, there are three khaki colours on these boys.  Hopefully successfully modulated and held together through the medium of agrax earthshade and deluvian mud.  (see what I did there ?). 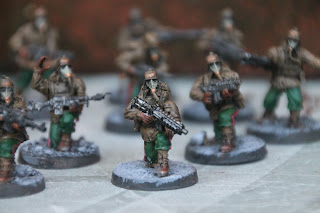 The firearms need a wash (nuln oil) and some of the masks may get a touch more. 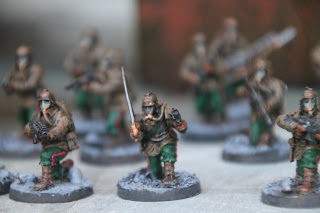 Hopefully the (supposed to be dark) green theme will be reinforced by these boys.  This man, who's uniform was inspired by a WW1 Russian uniform, fits nicely and of course the Palladians wear a similar outfit.  Obviously there has to be a logical reason; 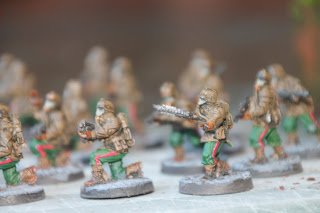 The textile manufacturers and garment makers on the Imperial continent of Acre have a contract with the DM to supply 72AG (and later 3422AG as well) are contractually bound to provide garments of a specified cut, in materials with specific performance characteristics, in a limited range of colours.  Ergo, the thematic colour schemes which then enable me as a painter and fluff nut to provide visual links across the army(ies). 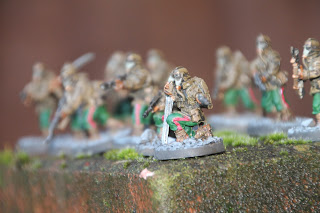 So I suppose I could claim that every single one of these is lovingly and individually converted.  But I think that being Kreigers chopped in half and rebuilt with VL and Anvil Industry parts, they're more bitsa toy soldiers than super deliberate conversions. 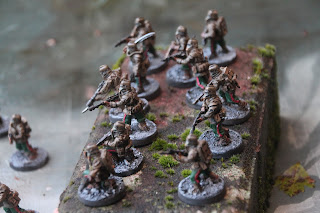 Having said that, for rescued minis, they've turned out OK. 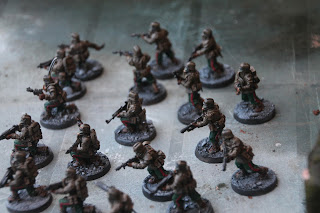