For the siege of Xyphonica, the artillery units at Corps level with suitable ordinance are brigaded into Bombardment Groups, numbered as:

The Bombardment Group is an administrative device designed to give the now static Corps flexible, round the clock cover; effectively a form of duty officer for each Corps ensuring that the artillery is on call when needed; each unit taking a turn, with larger units taking a larger share of the burden.

What the bombardment group also allows is to share the fire missions around between suitable units, so that Divisional assets are not over used or not used as infantry and armoured units rotate through the front line positions. 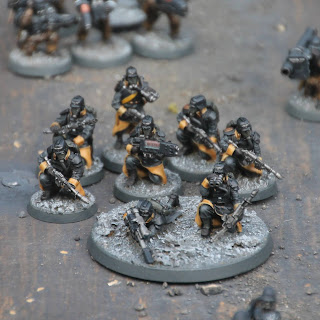 The pict shows a FOO party from 90th DKK Heavy Artillery Regiment, supporting the DKK 143rd Siege Regiment which arrived to reinforce 903 Division of 17 Korps during the Siege of Xyphonica. The FOO is accompanied by a technical assistant and the four gunners for protection whilst close enough to see the enemy.  One of the close protection party, which would be drawn from the regiment's drivers (now that all of the batteries are in static positions for the Siege), as swapped his las rifle for a plasma gun.

The FOO party are preparing to deploy alongside a sniper pair from the same regiment.  The regiment retains a platoon of snipers principally to maintain contact with the front line whether the front line is moving or static.  They are also able to engage targets which might be more suitable for their particular skill set and equipment.