Canoness Don Coin is well aware that in a real shouting match, the Chamber Militant of Casa Bonetti are hopeless outgunned.  So even as they were preparing to leave their priory, she sent messages to other Adeptas Sororitas Priories inviting any who felt inclined to join her mission to Devos IV and smite the heretic, the mutant and the traitor in the Emperor's name.

The Priory of the Oriente Protectorate has sent a delegation from its chamber militant.  This has been deliberately scaled so to not be refused, ie big enough to be worth having, but small enough, ie not enough to mount an independent action, to be a veiled insult to the Order of the Sacred Rose. 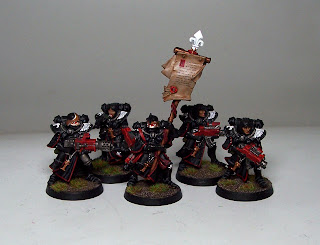 The paint on these was definitely by Golem.