“Fear is the path to the dark side. Fear leads to anger. Anger leads to hate. Hate leads to suffering.” — Yoda 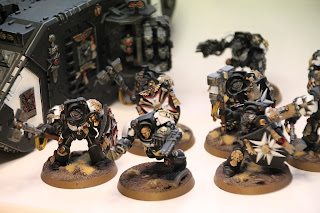 The brothers of the Lostwithial believe that they are not afraid of anything.  After all, they know that they are made to the Emperor's design, and they shall know no fear.

There were once some rhino APCs, made to the usual STC on some Forge World and duly supplied to the Imperial Fists.  As bits wore out and replaced, in common with a lot military assets, Marine, Guard and Navy, the designated items may well have been reconditioned and refurbished so many times that there are possibly no original parts left.

These Imperial Fist vehicles eventually became Black Templar vehicles, honoured and revered for their history and venerated service, after more time has passed, damage is repaired and worn parts are replaced, there is no part of any of these vehicles left which ever saw an Imperial Fist. 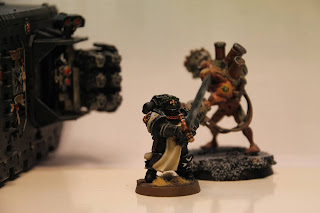 In the way such things work out, the Black Templars who had these vehicles no longer needed them.  Perhaps their crusade suffered losses which meant that these vehicles were surplus to requirements.  Perhaps the Black Templars were supplied with brand new vehicles to replace the bitsa parts and chop shop tired old rhinos they had.  And on a long campaign against a formidable foe, these old vehicles could be given, however grudgingly, to other Space Marines, however unworthy, to prosecute the cause and carry out the will of the Emperor.

But Black Templar crusades, even strike forces, are largely self governing.  What is established lore for some may be unknown to others.  The brothers of the Lostwithial have been made away that the Incandescent Coyotes (Hisitee Nou in their mother tongue) have three Black Templar rhinos.  And that the parts of those honoured and venerated vehicles which identified them specifically as Black Templar vehicles have now been removed and replaced, thus dishonouring those probably stolen vehicles. 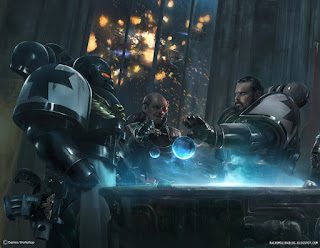 Castellean Brodeep discussing, in a prayer fuelled war council, the three ancient Imperial Fist rhinos, lovingly cared for by the Black Templars, and the dishonour done to them now.  He is outlining the retribution to be enacted should the brothers of the Lostwithial ever come across the Incandescent Coyotes during their travels.

Not that I'm suggesting these valiant upholders of the Emperor's will angrily roam his empire, leaving nothing but suffering and ruin behind them.  All in his name.
Posted by Zzzzzz at 22:59