It's the w/e of 16/17 Aug and Mrs Z has had a wisdom tooth out; so whilst she is recuperating, I've got a few hours in the garage. 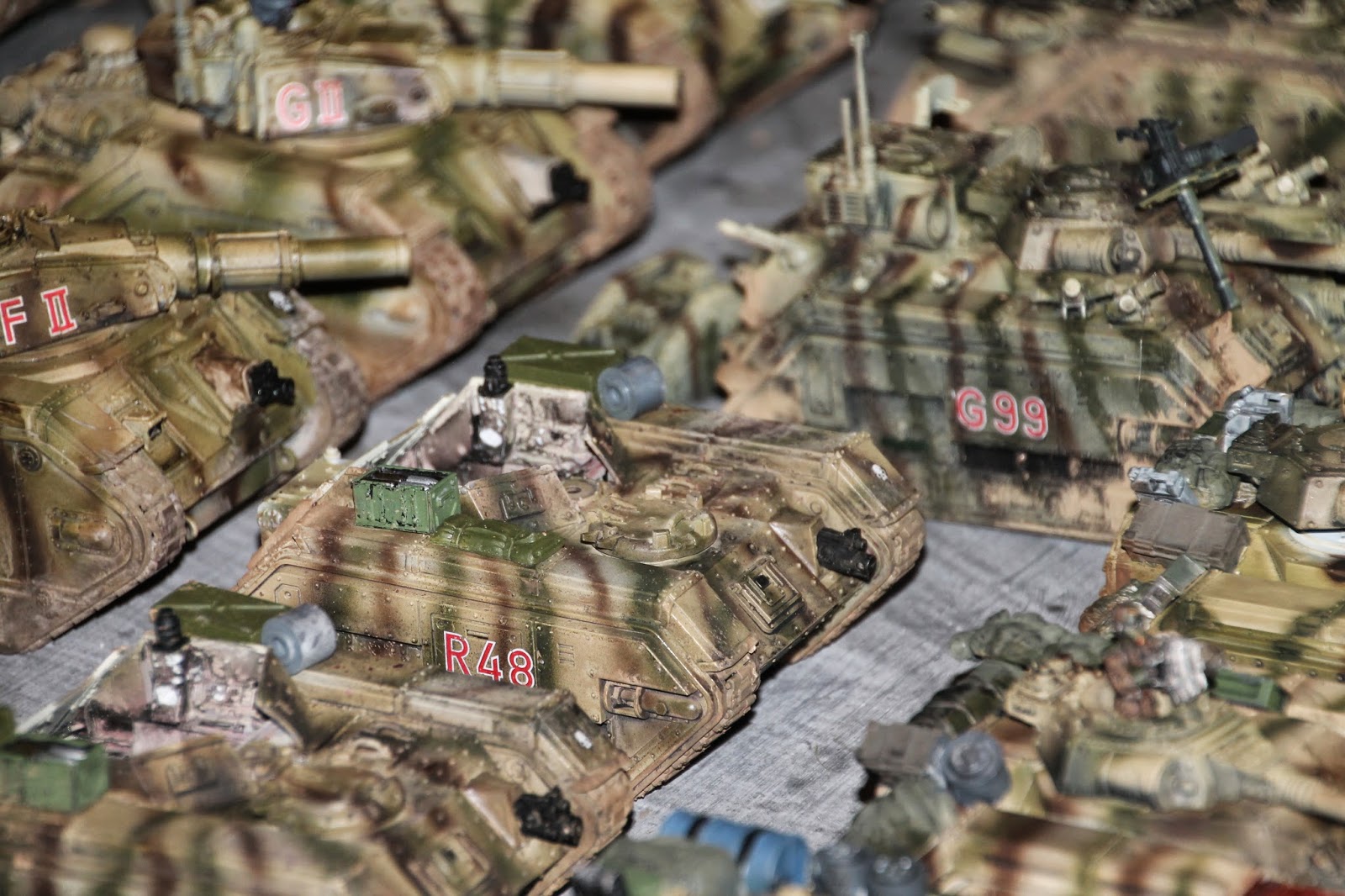 You can see here the camouflage, decals and luggage on a representative Salamander. 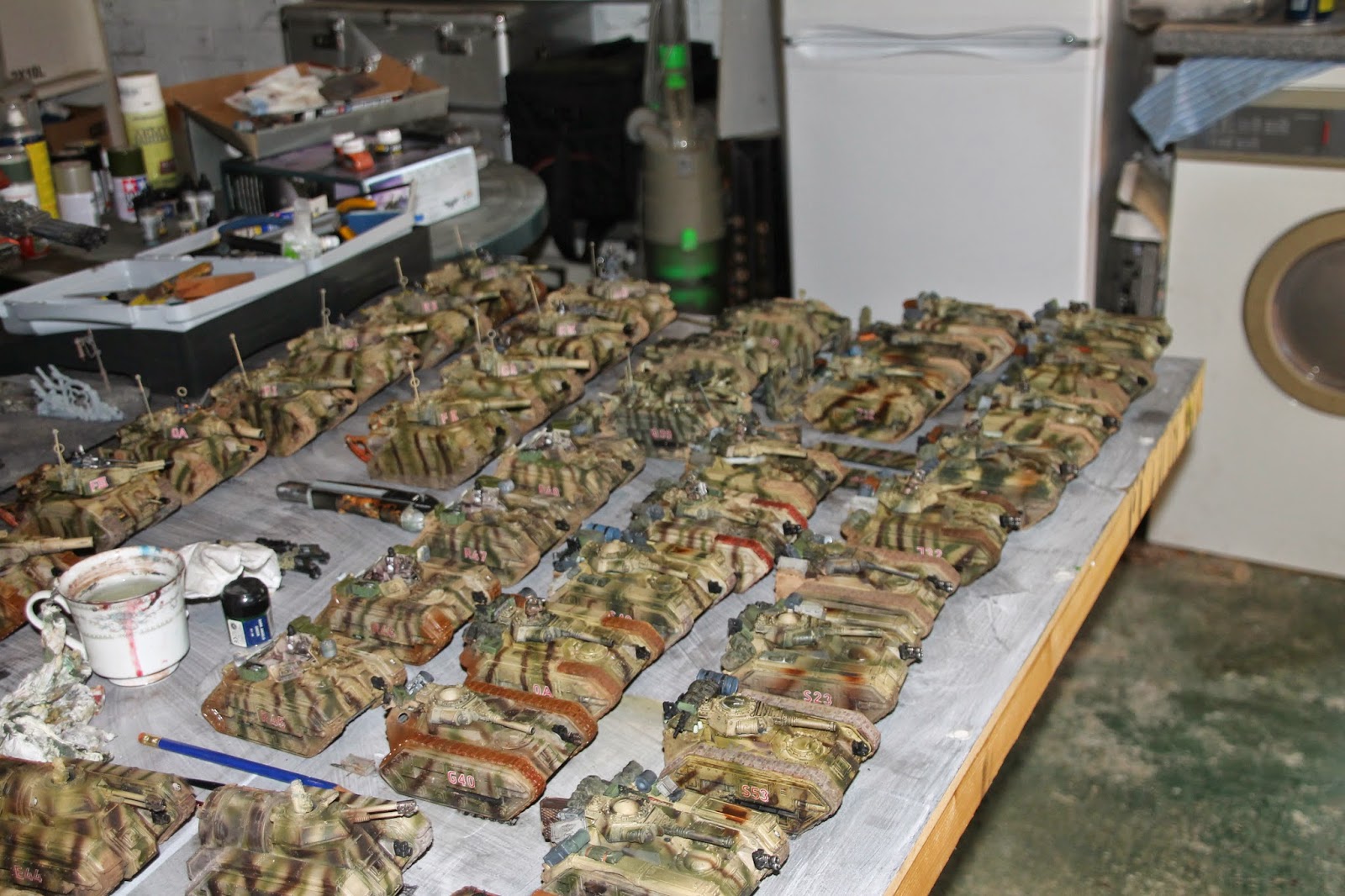 The whole fleet out for a pin wash and mud on the tracks.  This is what thirty nine LR and Chimerae chassis' looks like; there are still six hedgehog pattern Hydrae, one thunderer and two lynx to add.  The ones that look as if they are a different colours are still wet. 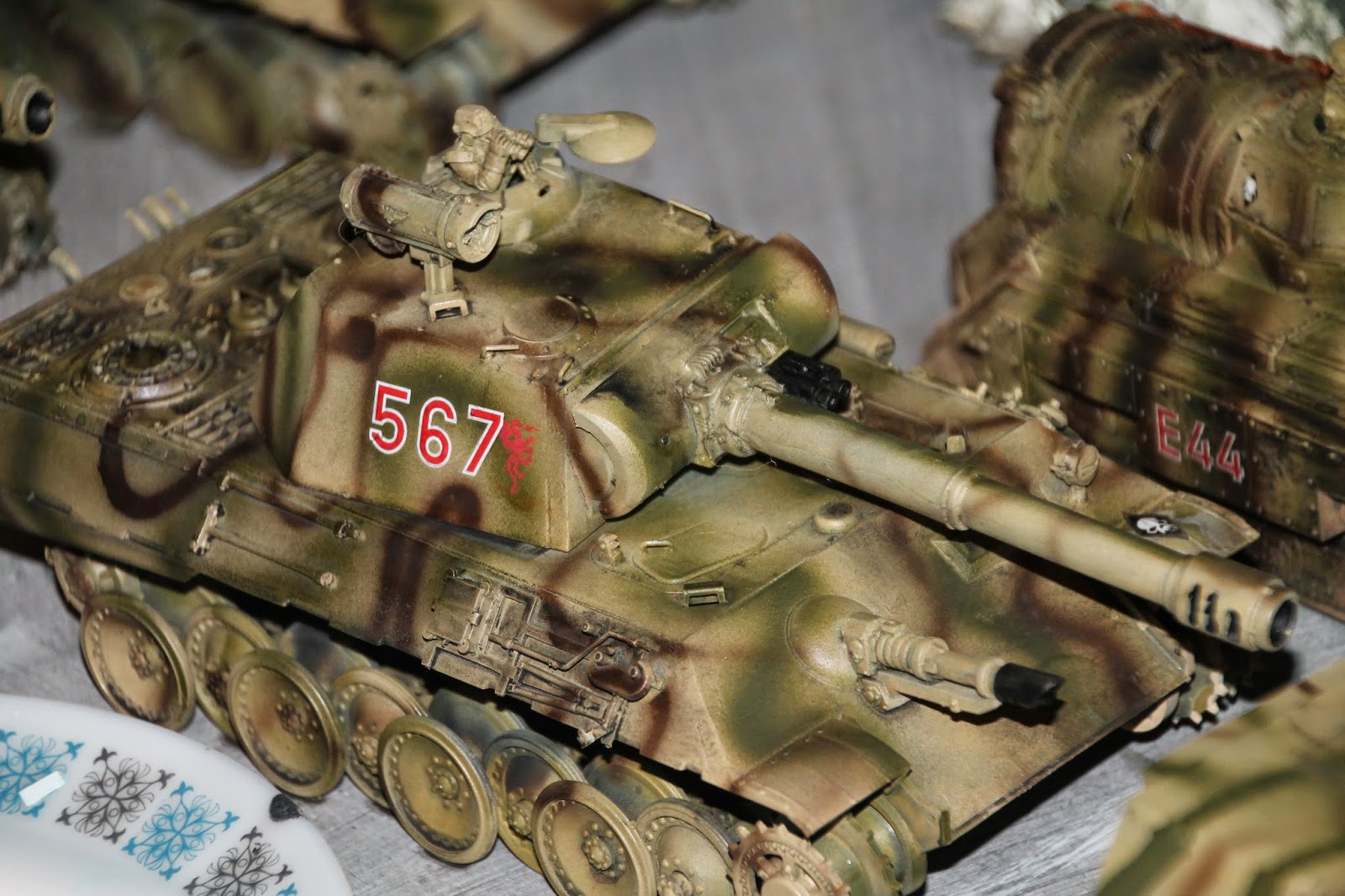 The DKK riposte to the King Russ, including pin wash.  I'll pin the tracks out flat and weather them and then add them to the model.  And do a bit of work on the commander as well.  Along with the rest of the fleet, there will be some spot rust flicked on with a toothbrush*. And some sponged on chipping. 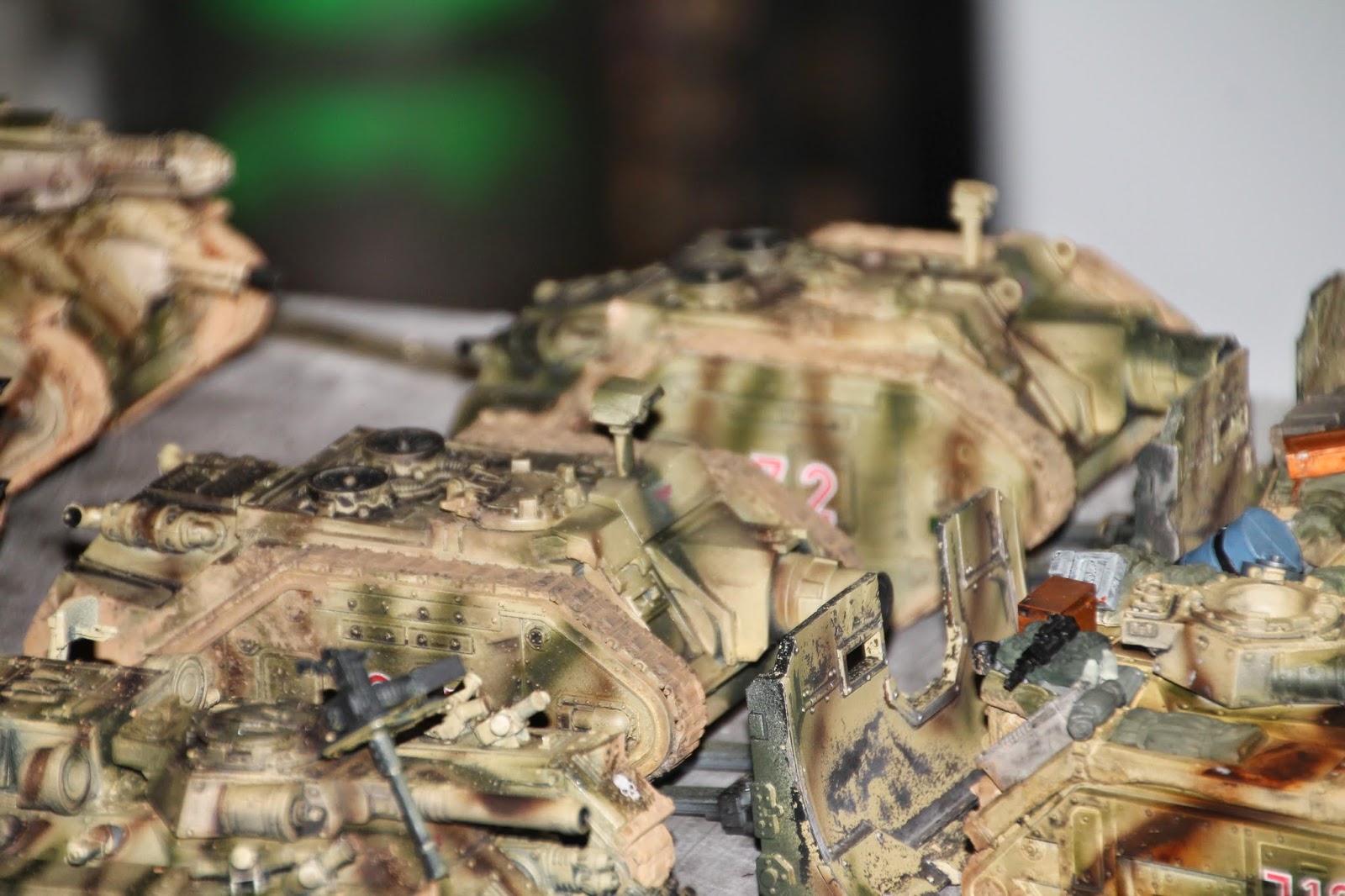 The two Thunderer conversions.  The sooting on the extractor fans is deliberate, but the last time you saw these, they were just grey plastic, I think.  Now they are up to the same stage as the rest of the fleet. 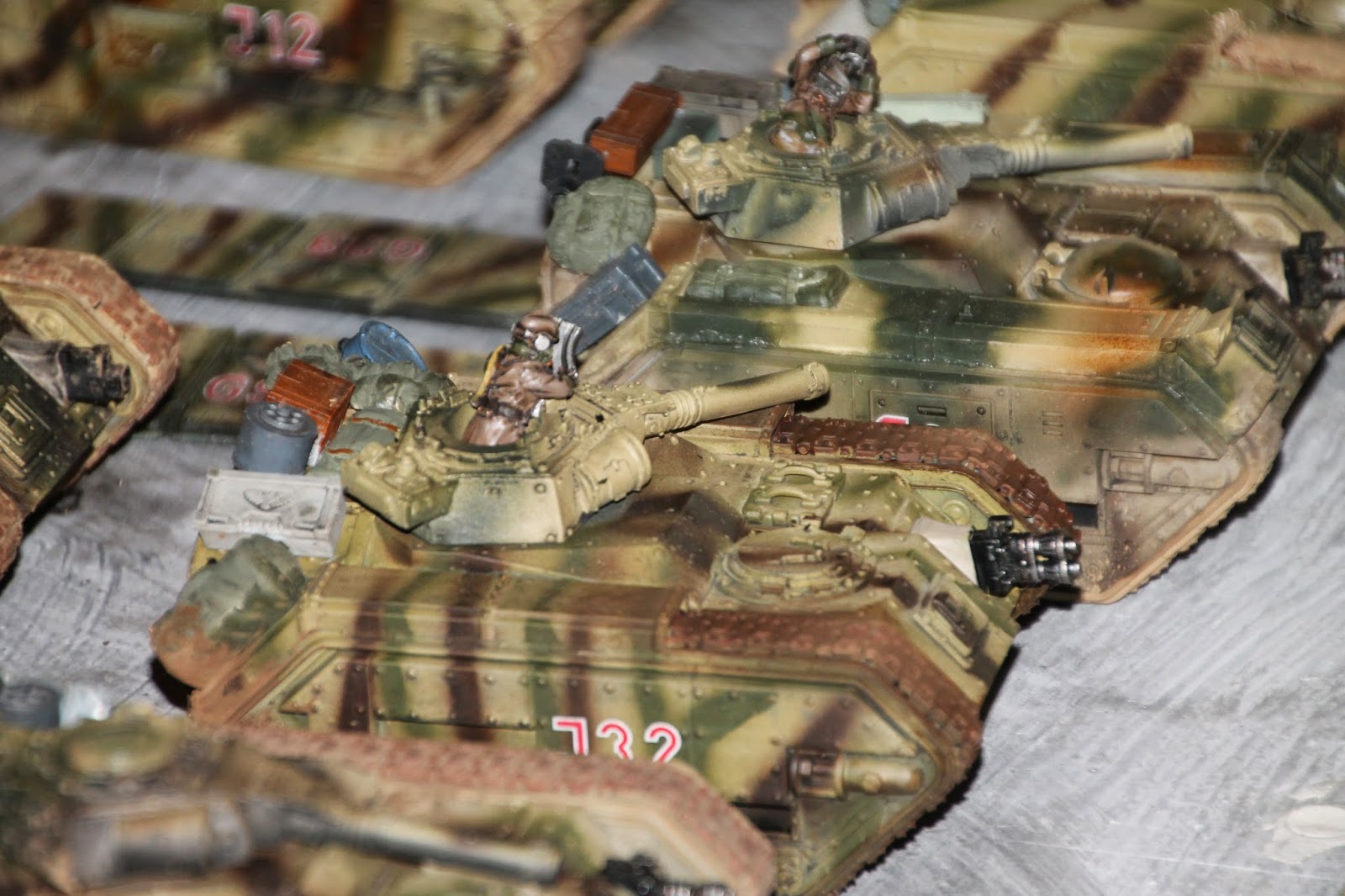 A couple of the chimerae.  Some of the stowage got knocked off during the process and will get stuck back on.  My plan includes treating all of the spare road wheels at once; any adjustments to the fleet will be done like that for homogeneity.  Now, I won't pretend that any of these are going to win me a Golden Demon, but the whole lot them together, with their weathering, stowage & mud being similar across the collection will, I hope, make the whole thing pleasing to the eye. 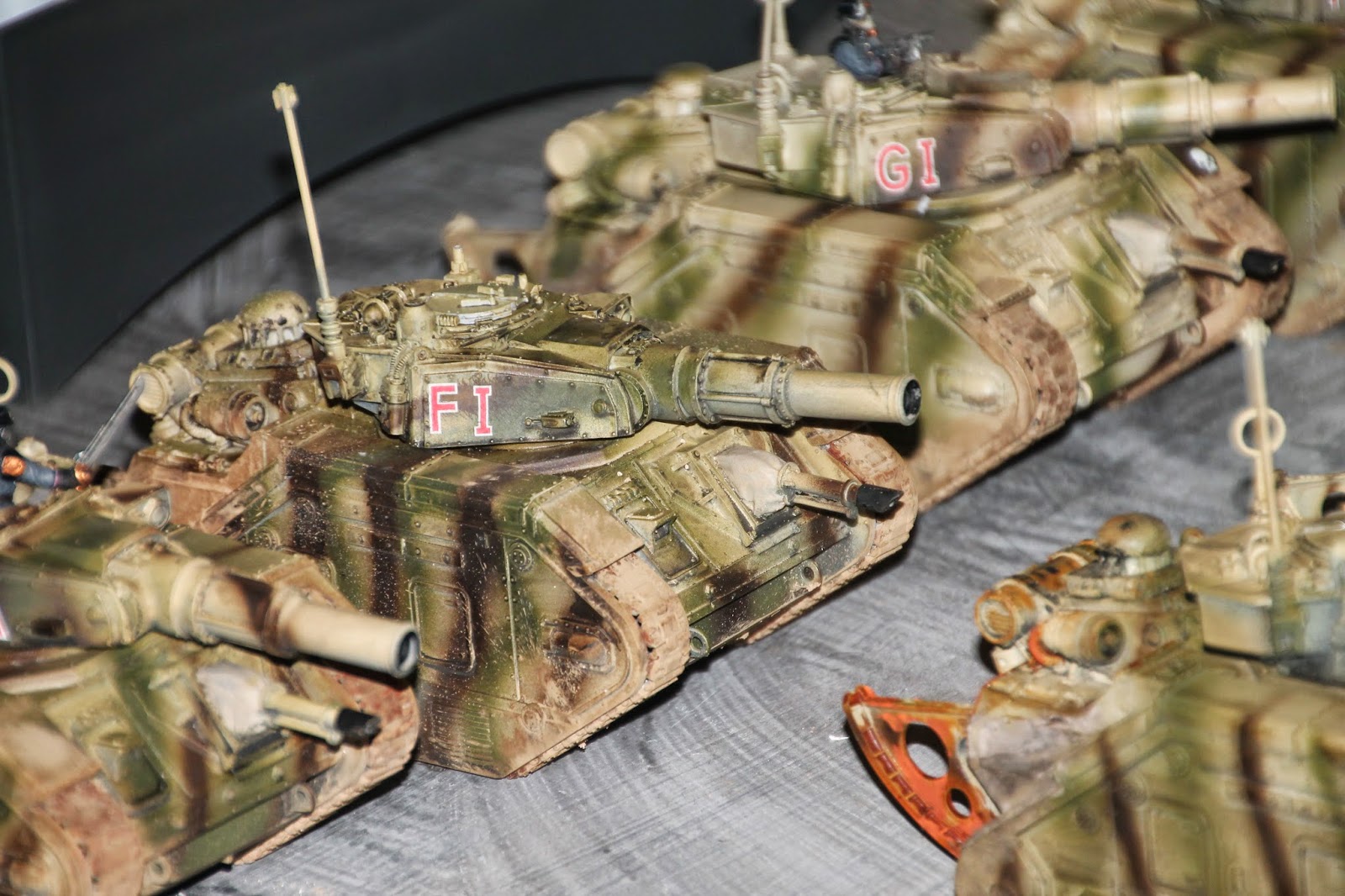 These photos were largely illuminated by the camera flash, the contrast between the camouflage, detailing and so on is not so harsh as it looks in the photos, however, I thought it gave a good impression of the state of the DKK fleet at the minute.

They all need pintle weapons and the crew/hatches fixing in place.  We'll see how Mrs Z feels next weekend ! Update: Bank Holiday weekend and I've found time to do a little more titillation; Boltgun metal and then Mig rust on the road wheels that are part of the stowage on the Chimerae, gluing back on all the stowage that was knocked off last weekend, more oil stains around the LR fuel caps, rust on the Panther exhausts, rust on the Crassus exhaust and a little more oil staining on the non-aligned hellhounds. Thunderer exhausts are weathered and I've started collecting together the Heavy Stubbers for this little lot. Also cogitating about smoke dischargers and searchlights on the Chimerae - I think they'll pass muster as they are, I suspect that putting more on them might just leave them looking overcrowded and messy. er.

* It should be a teethbrush.  It would only be a toothbrush if it was for a whale.