Sunday am, Admiral Drax flew south for what remained of the summer.  Like a swallow or swift, but different.  So whilst waiting for the 'event shelter' to dry (yes, these things really are good enough to just keep mentioning) Kartias and I sat in the garden and spoke for a short while about airbrushes.

You can take and educator out of the school, but you can't take the teacher out of the education professional.  A miss quote (mash quote) but allow me to elucidate; without a shred of 'I thought we went over this three years ago', my dear friend proceeded to dismantle and clean my airbrush, reminding me of all of those things that I had, over time, allowed to slide.

So now, aside from a slightly sticky airvalve (just press it again and it stops), my airbrush has returned to its former glory.  (the paints all need anti-centrifuging, but that can be done...)

On to the progress ! 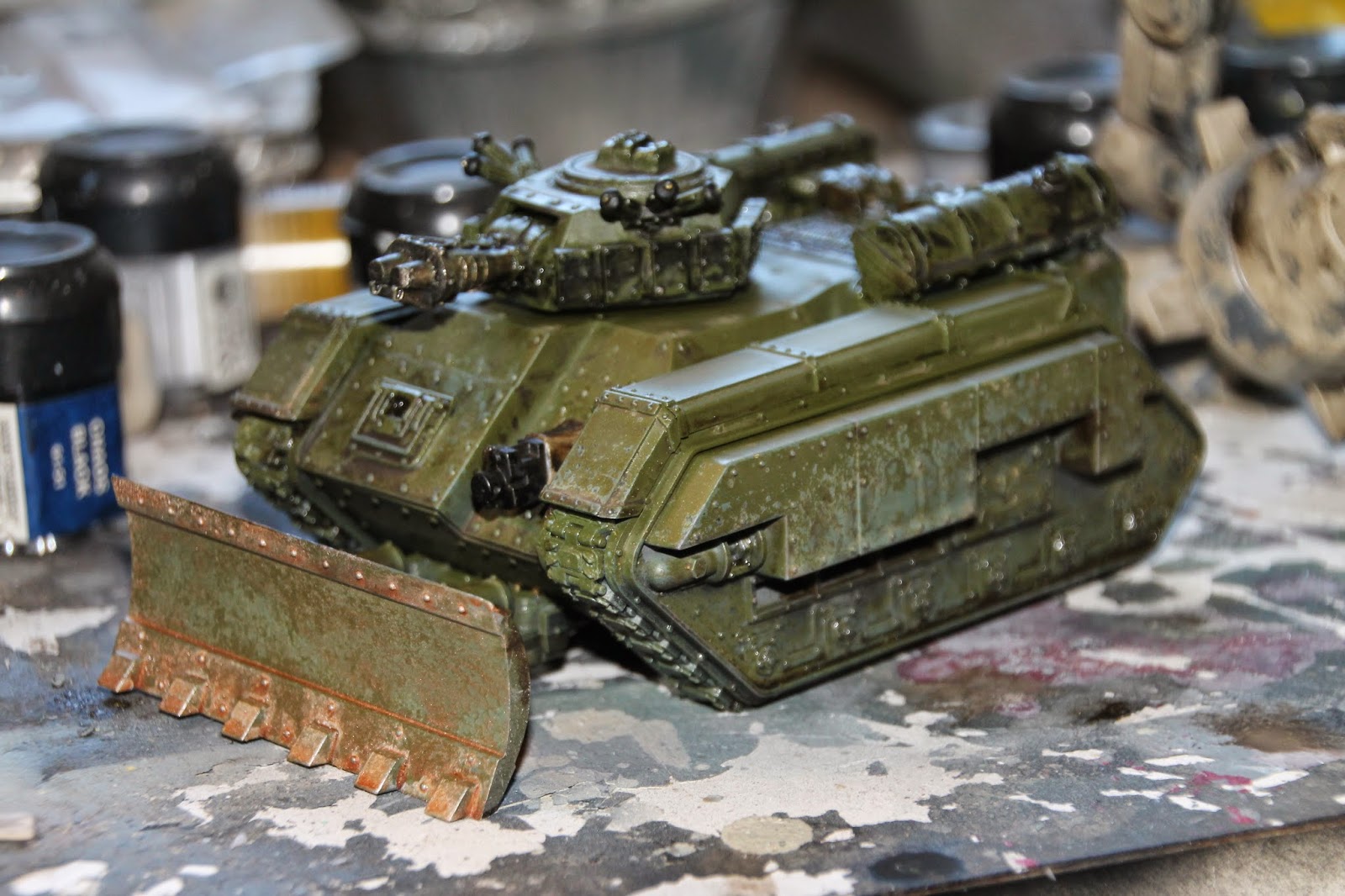 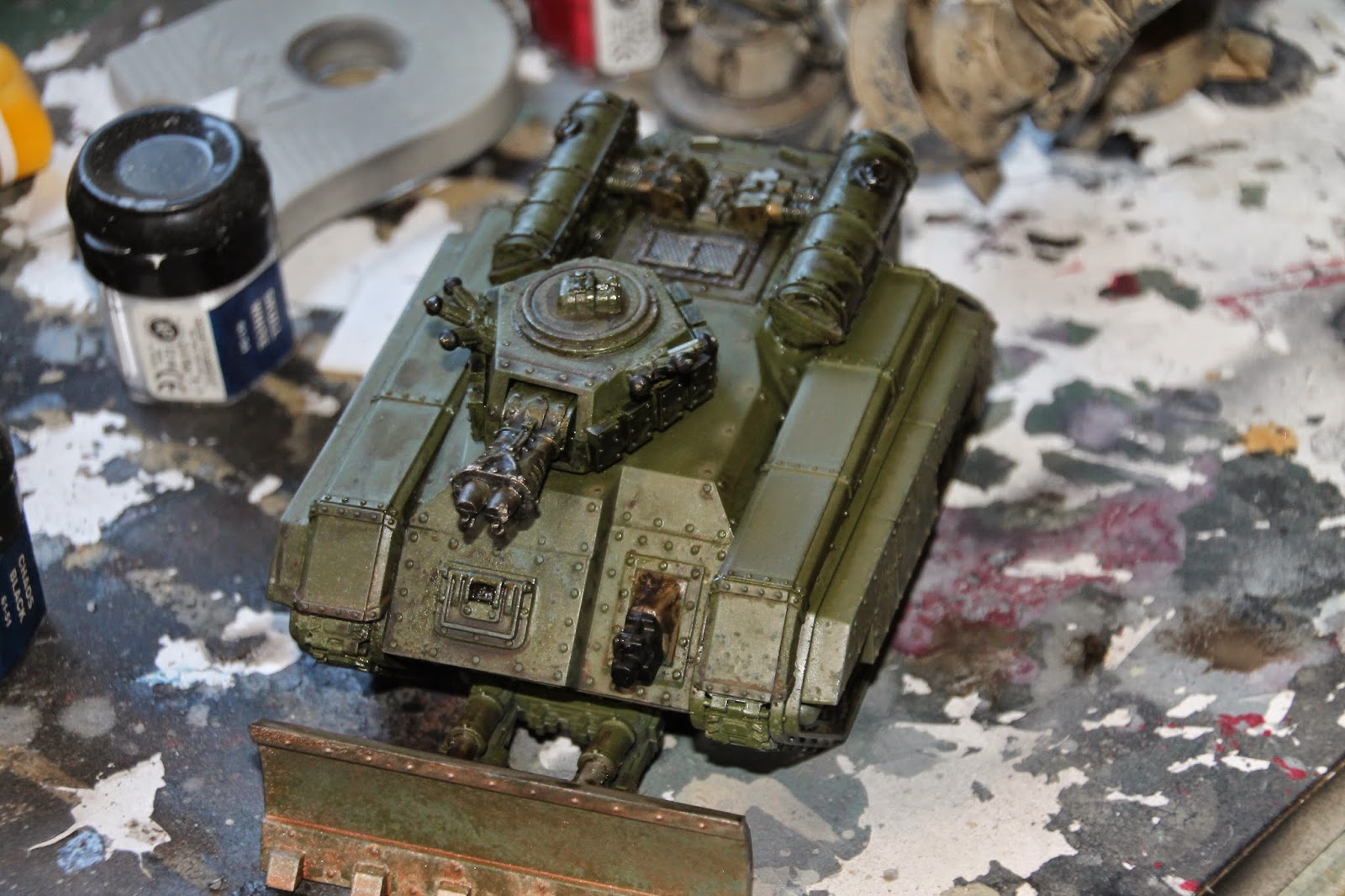 Another view.  Tracks next. This quite deliberately has no markings.  Making it eligible for service with whichever side has the points to spare. 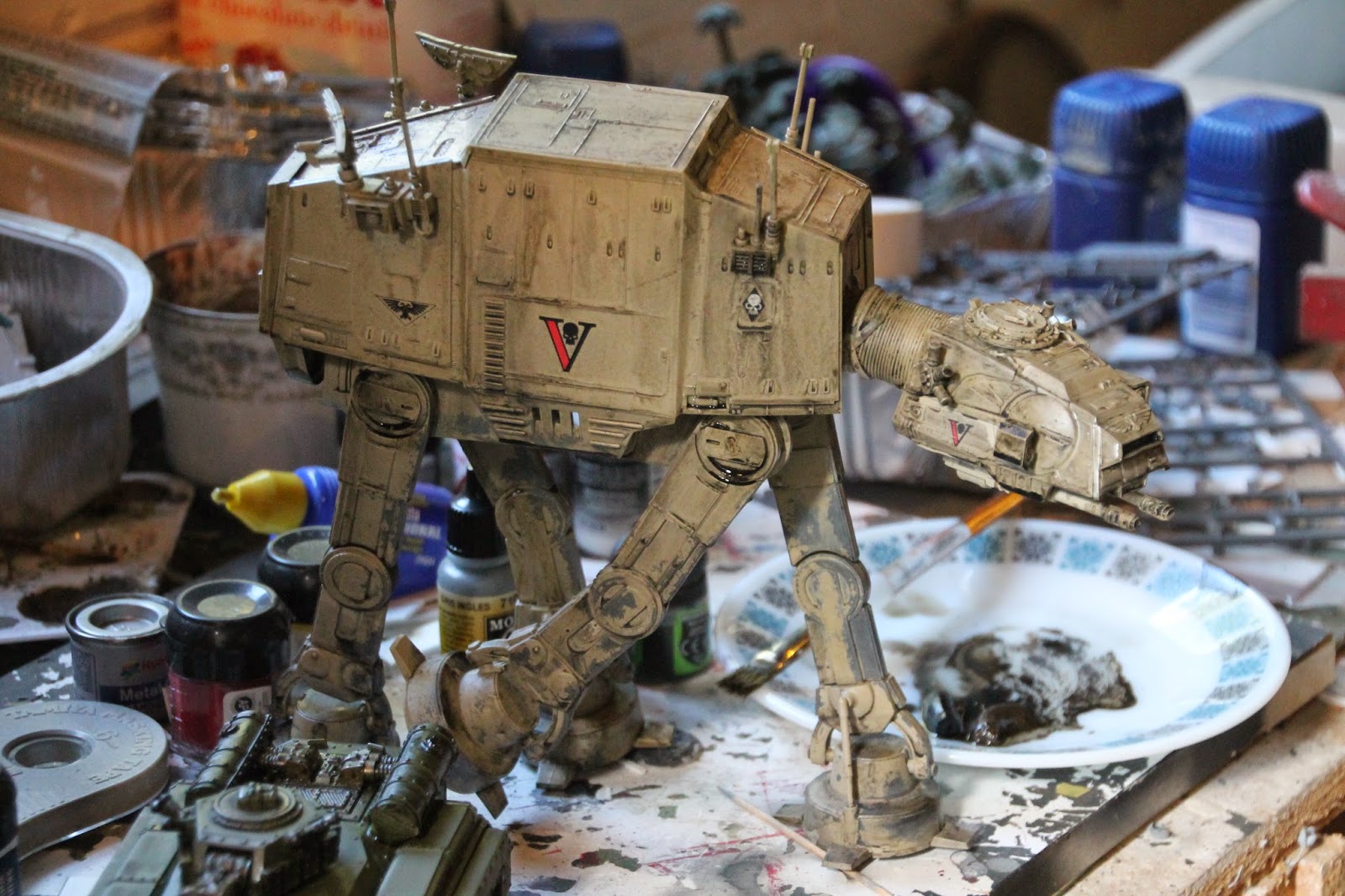 The Vostroyan command AT-AT, rebuilt, painted, decal'd and wevva'd.  I hadn't meant it to look quite as grimy and battered as it does, but meh, there's a war on, y'know ?

Incidentaly, I sized the normal GW flying base against the Knight base and the Knight base is bigger and I'm gonna get one to mount this bugger on to stop if falling over again.  After this latest rebuild, it's a teeny bit wonkier than it used to be. 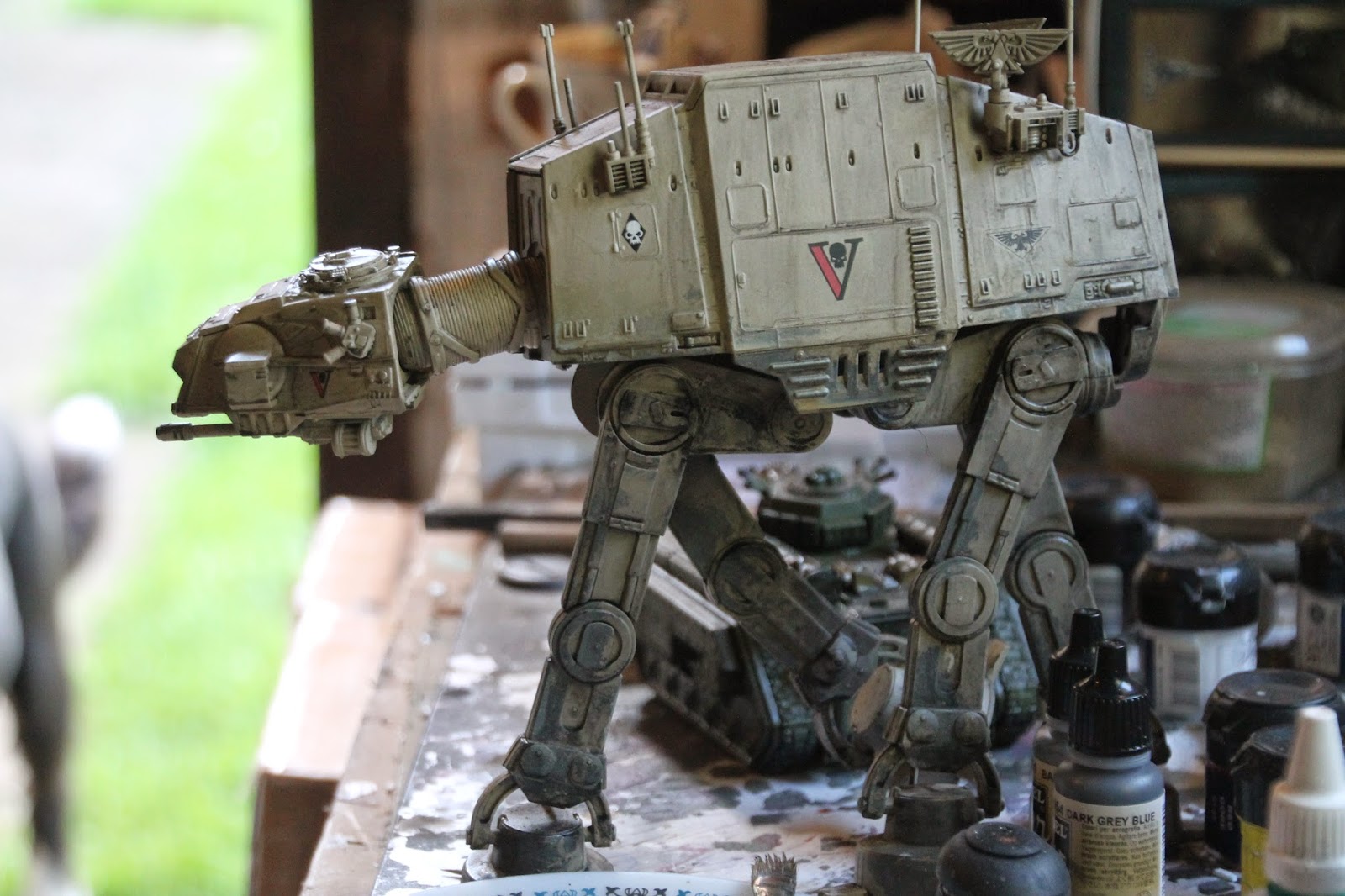 Now, you would be forgiven for saying "That's cute Zzzzz, but following your own rule about accurate fluff and no bollox engineering, we've spotted the weakness here, which is access and egress, There appears to be no way or out for the lil' men.  So waddaya say ?" 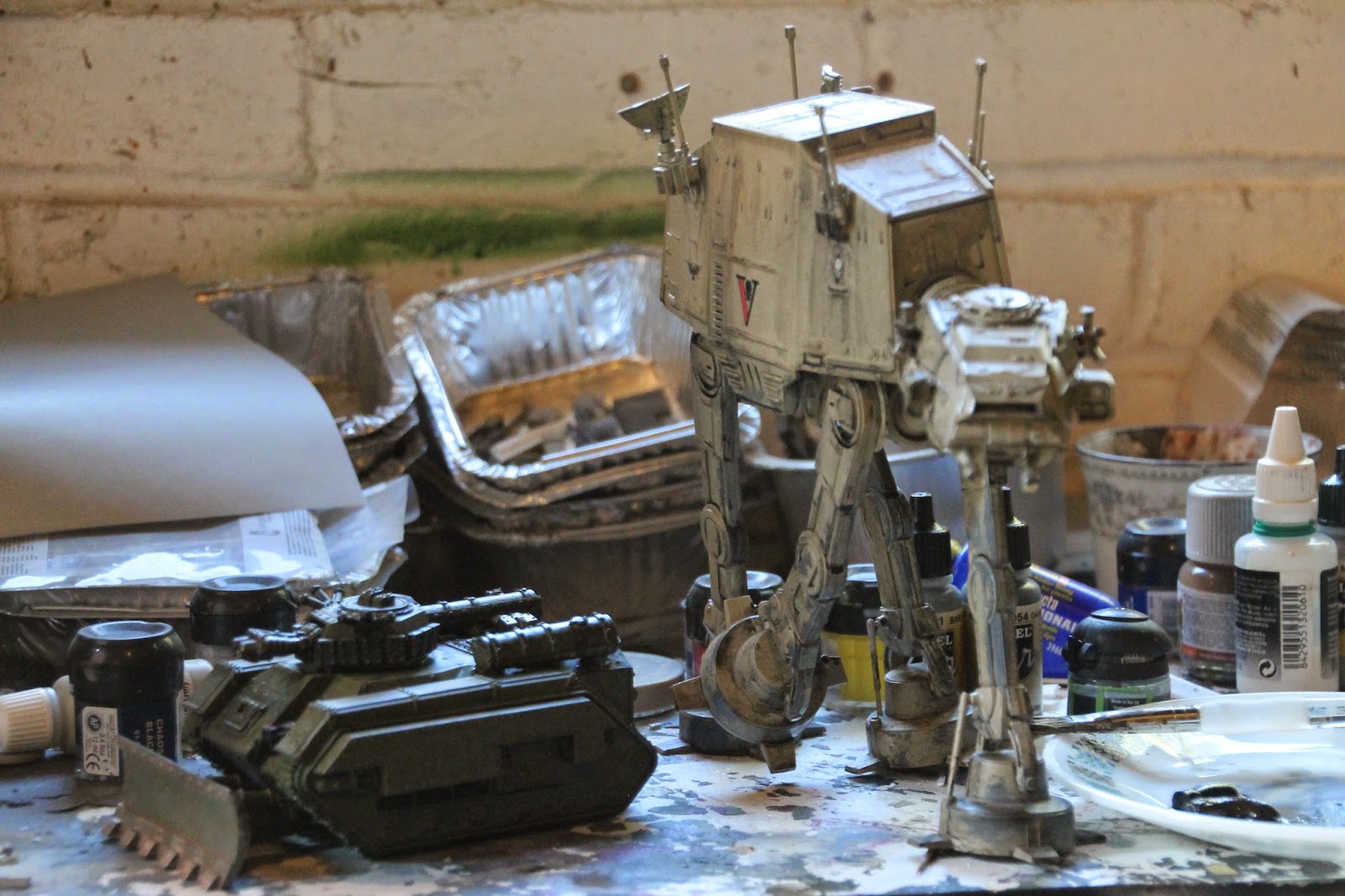 And my reply would be quite right; it is supposed to be a command chimera, so the extra space here is taken with the gubbins needed to make this baby walk (and it is a baby one..) and there are panels on the side which could be airtight doors.  And they would have to abseil out and rope ladder back up.  But ultimately this only passes the Zzzzz contact with reality test by adhering to the most important rule.

I think it's kool.

Just the end caps for the smoke dischargers, lenses & auto cannons to go and she's ready.