Wow, you think.  That's been a long time.  Yes, but nonetheless, progress is made !  In the dim mist's of the internet's past, a nice man who goes by the moniker "Sheep" (he now does a fine line in SoH) did a very nice DKK titan hunter army.  One of the things I sort of half remember is putting tarpaulins on vehicles. So all that time ago when I began the salamanders this what I intended to do.

Apologies for the ifone pictures. 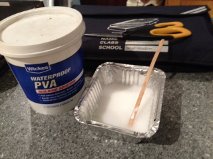 A weak white glue solution.  My thanks to Costa for the stirrer and our local Chinese takeaway for the tin tray - I grab the ones which had the crispy duck pancakes in them - the pancakes are plastic sealed and the trays do not need cleaning.  Not that we have that many takeaways.... 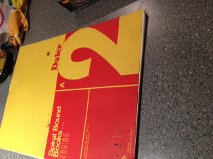 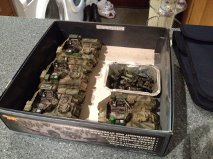 Vehicles awaiting these tarps before they can be loaded up with the final bits of stowage and the weapon systems and crew. (see laying about in the other tray) 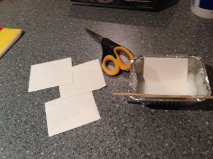 Way more than enough paper - its a strip off the bottom of a page cut roughly into four sort of equal bits of the order of size for the Salamander similar to those I remember from my previous life. 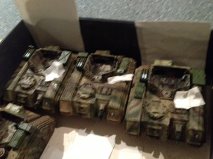 In the end, tiny amounts are pressed into place - air recognition panels perhaps.  I didn't want them too large as I've already put a bit of effort into weathering these in the first instance.  But this stage is now done and I can on with the rest of the build...

Edit: It was Bungaroo's thread on Warseer.