OK, so we all know that air power is the new black.  The Void Dragons already have a Pheonix fighter bomber, but a brief encounter with the Spaze Wulves convinced me that something a less points expensive, with outrageous air to air capability, was in order.  So we had a long hard look at the F-18 and the swing wing Mig23.  The swing wing was nice but very expensive, so we went for the F-18 Block 3.  Wha- ?!?!  Sorry, got a bit carried away there; I could get two Crimson Hunters and have change left over from the purchase price of the FW Nightwing. 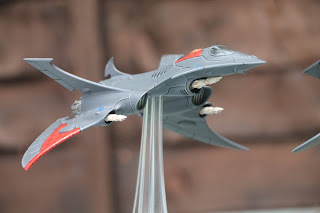 A pulse laser and two bright lances, because most of the SM flyers appear to be AV14 on all sides. 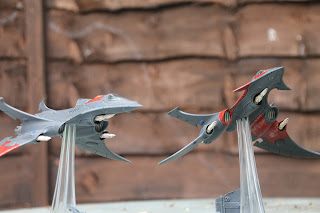 And of course, redundancy is king.  Besides which, it gives me licence for badly voiced ace/wingman conversations during a game.  Pew - pew - pew ! 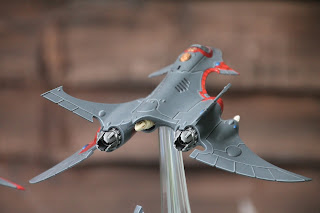 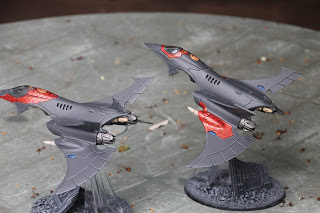 And lovely painted, the same as the existing Void Dragon assets, by Andy BG from Iron Legion.  Cheers, Andy.   And because Andy did it the weapons are on magnets to swap out for D-Scythes and that nasty soul burner pod.  'E likes magnets does Andy.  Good job too. 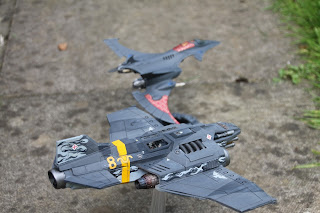 And just because I know that the question was on your lips, here it is next to the T-burd.  I suspect that in common with reportage from the skies above WW2, the pilot who gets the drop on the other guy is likely to be the winner.  Beyond that, a fight between these two is the normal Eldar/Imperial fight - the pointy eared scalpel vs the baseball bat with nails in. 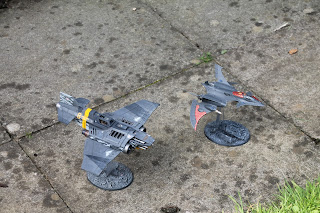 Damn, those colourschemes are effective as camo.