So you guys know that my predilection is to built proper sized military formations.  Obviously this comes with the problems of expense, building and painting resources and finally storage.  And realistically, for a lot of units in the future, I only need a handful of minis to depict the idea of a contribution to the campaign.  So here are a few of minis in the sort of numbers I'm likely to use going forward. 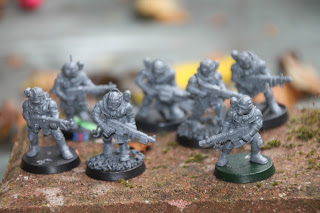 Today on the brick of scrutiny are the 3rd and 4th generation cultists from the Overkill boxed set/game (does anyone really buy these and play the game therein ? - more than once, I mean). 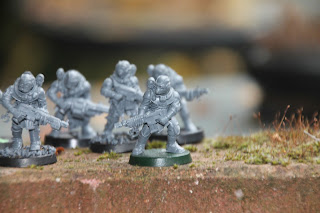 So the heads are from the Militant Tortoises set, both the SWAT masks and the berets.  As they are, each of them is still decorated with a cult symbol.  I'll chop off the dangly ones and cover over the others with, appropriately enough, purity seals. 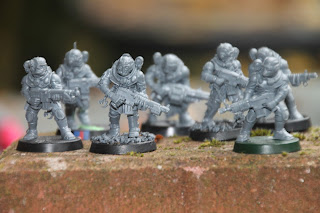 The mining derived suits will give these guys a backstory, two small squads of seven supported by a guy lugging around a grenade launcher - it's obviously heavy; these are real humans not the super indoctrinated Cadians and Catachans who fling around military hardware like it's made of plastic.... 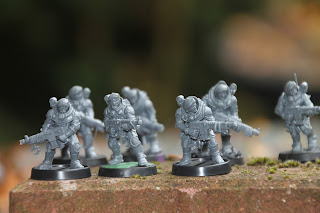 And the autoguns give them a distinct look.  The beret decorated dudes look pretty cool.  Until I start painting them.  Speaking of which, I'm thinking of militarising their suits, not having them in industrial yellow or orange. Which is going to mean, probably, a mid military green instead. 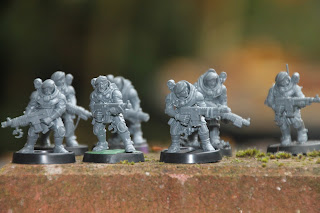 The few with claws can be explained away as mechanical bits.  After all, who doesn't want prosthetic claws ?  Ermmm.  I have some Eisenkarn hands, which will always look good on conversions.  So shaving the claws off and adding some applique fingers shouldn't be too hard... 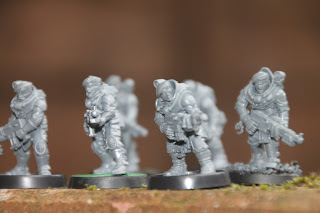 The rest of the cult - I've decided that I really don't want another army.  So the 'stealers and other more gribbly bits are on their way south, even as I type this.  By the time this is posted, hopefully they'll be happily ensconced in their new home.
Posted by Zzzzzz at 03:50