Searching for a head. Or a graphic novel.

So, some of you, I know occasionally play computer games.  I'm hoping that there's some one out there who is a bit of a Killzone fanboy.

I don't do FPS, principally because I'm rubbish at it and can't get past the warm up thingy which most people skip at the beginning of a game.  So this stems from idle curiosity, not me ever having actually played the game or even knowing someone who owns a copy.  Anyway, I am interested in the Killzone/Helghast fluff; largely as a possible background for another IG unit.  Like you hadn't figured out already.

The problem trying to find a graphic novel about this franchise is that one of the games in the series has a feature where the Player Character spends his time collecting the pages of a torn up graphic novel during the game....

So googling Killzone and/or Helghast Graphic Novel doesn't actually bring up a graphic novel (if there is one) but pages and pages of stuff referencing the sequences in the game where the pages are collected and then millions of words about the meaning and content of the in-game comic.

So, Oh wise and mighty blogosphere, am I on a hiding to nothing ?  Is there a graphic novel or something out there that my feeble google-fu has been unable to find ?

And, just to bring this back to the table top, what about heads like this ? 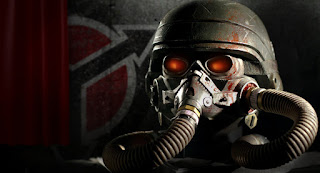 There's VL heads which have the DKK like breathing tube vibe or there's the Pig Iron kolony militia heads which have a Vervunhive/Helghast vibe going on.  Hummm, I wonder....
Posted by Zzzzzz at 02:31