Three way in the garden. Sounds like fun eh ?

Now, where was I ?  Ah yes, doubtless you'll have seen Karitas' four way in the garden, to which I added my view here.

So we come now to a three way in the garden.  Admiral Drax's annual foray north to civilised lands where there is bacon and tea at the same time.  Karitas quite wonderfully brought down his 'event shelter', and a good job too as it happens.  I can see this ending up on every gamer's Christmas list - whilst the garage is dry and provides shelter from gusting winds that steal army lists and blow over large unstable models, the 'event shelter' has light.  Not electric light, but as long it's day time, you can see what you are doing.  Which is not always the case in the garage.

Anyway, Unteroffizer Z of the Death Korps of Kreig is leading a small patrol into the ruins of some emperor forsaken town somewhere else; to investigate the presence of Orks, which has been reliably reported by someone who probably shouldn't be trusted.

Admurul Drak and 'is boyz are holed up in the intact Administratum building, waiting for something.

Corsair Prince Karitas is looking down on the whole thing and decides that the orks and DKK offend his sensibilities so much that his going down the planet (he will have to get new shoes afterwards) and going to tidy up.


So what we have here is three armies at 525 points (exactly) each.  And no vehicles. 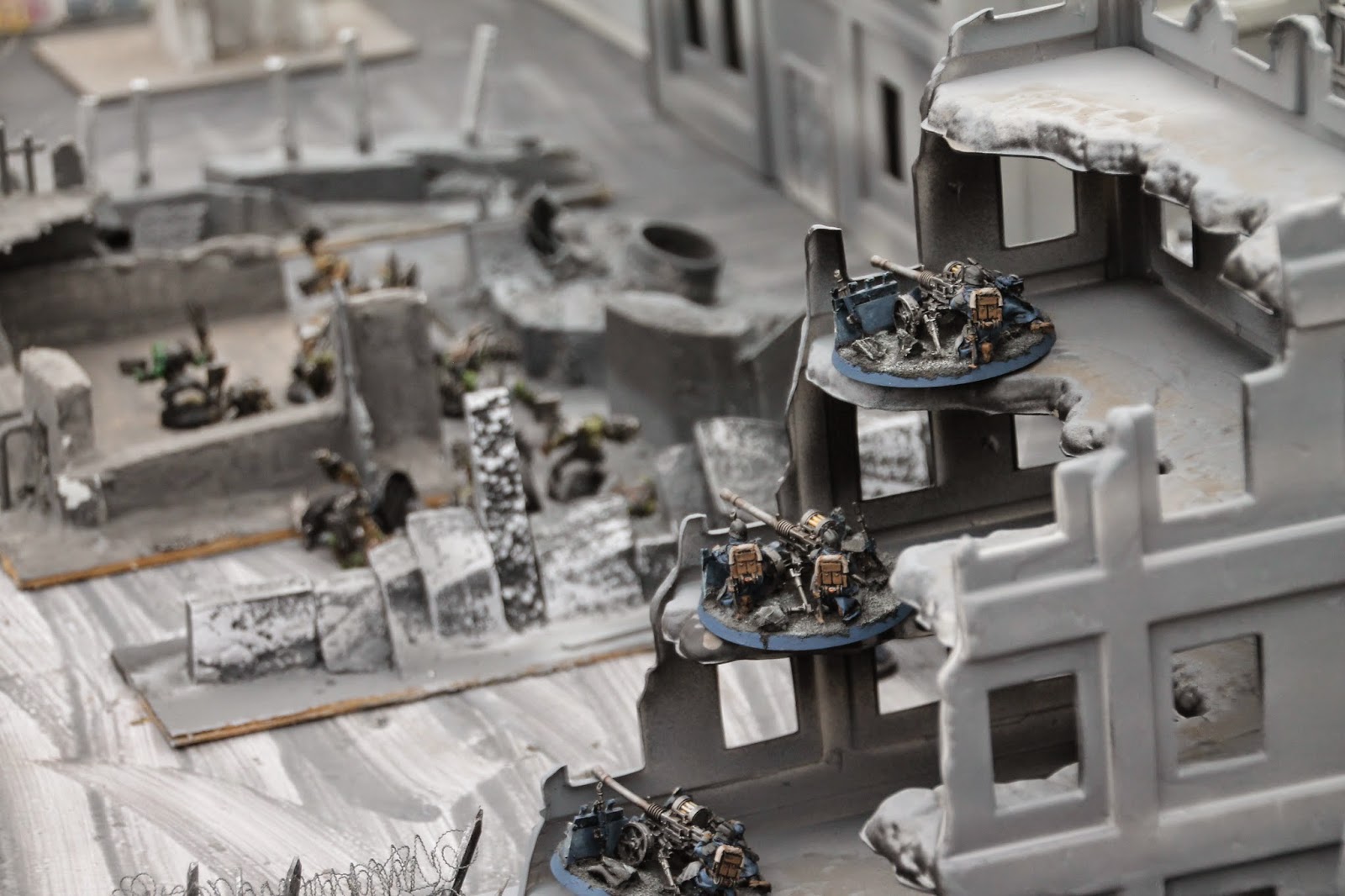 The shootin' starts.  Guardsmen have enormous cover saves, but orky shootin' is rubbish anyway.  But at this stage of the game the orky shootin' is still enormous in volume, so Unteroffizer Z is loosing Hvy Wpn teams at an unsustainable rate, whereas the orks are just soaking up the hits. 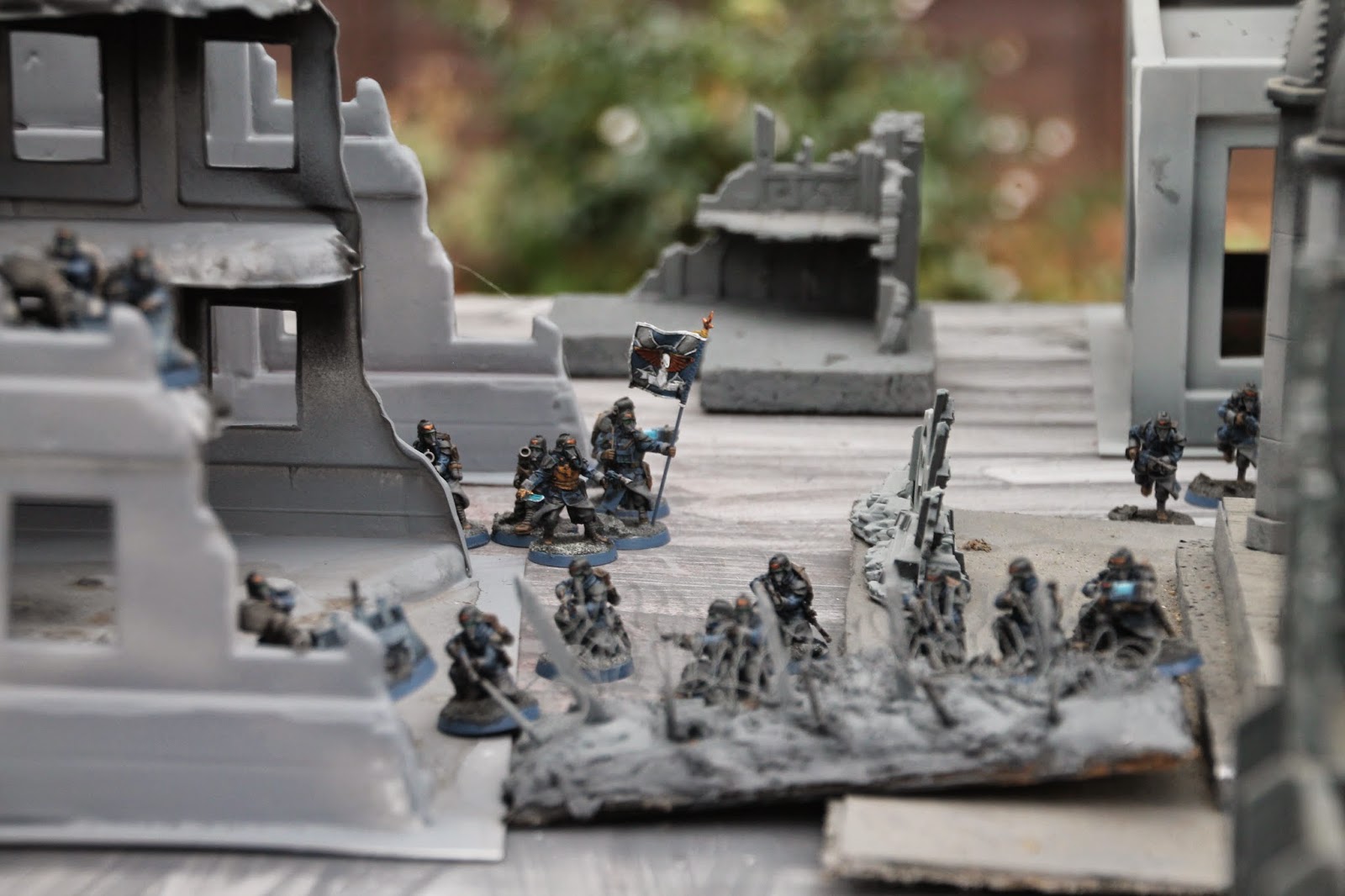 Hurrah for the brave Landsers.  Most of what you can see in this picture are bout to be obliterated by the Corsair Prince's Orbital Strike.  Thus begins the slow heamorage of VPs as my little army is chomped through by the baddies (hey, if they're not on my side, they're baddies). 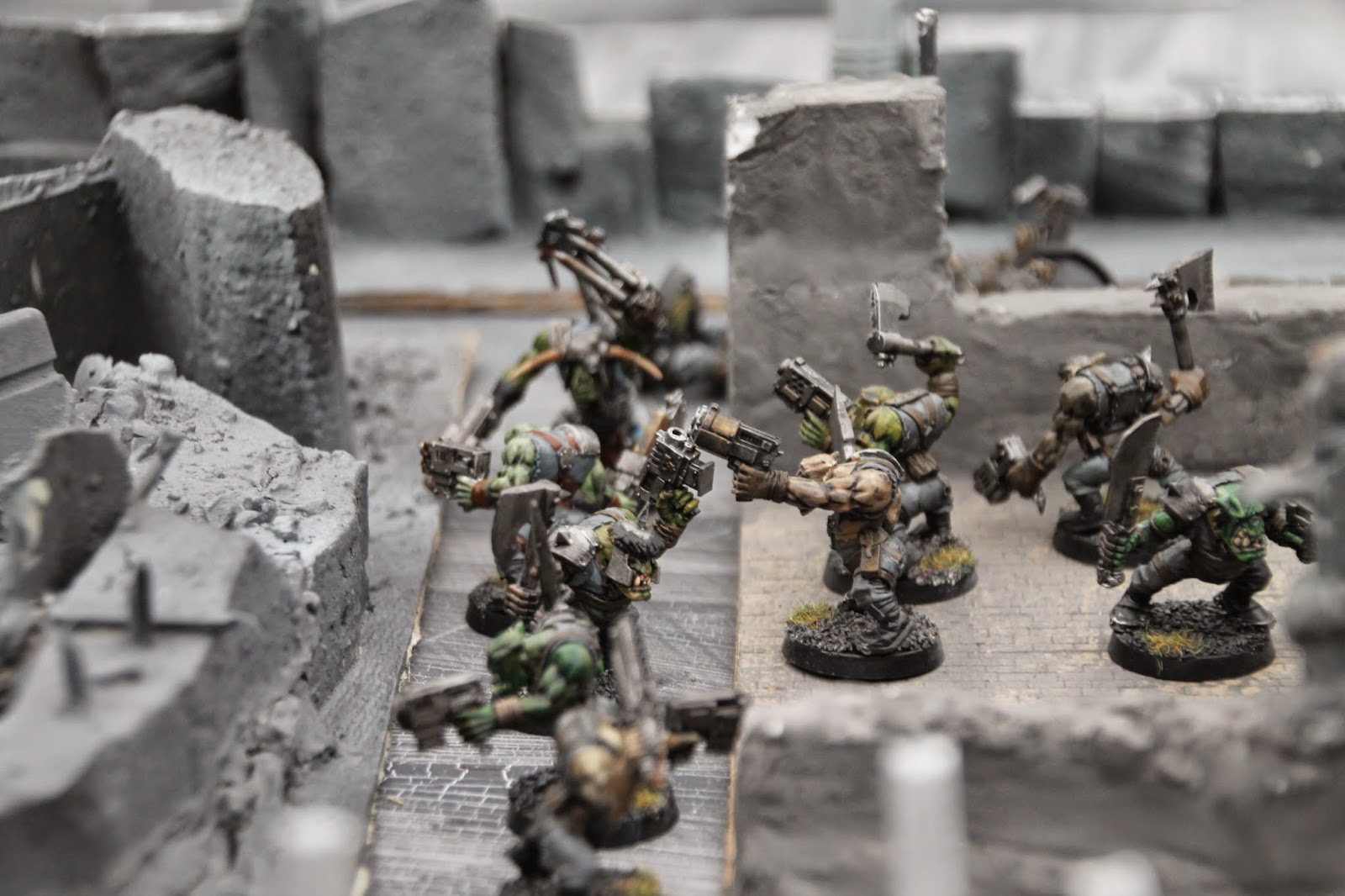 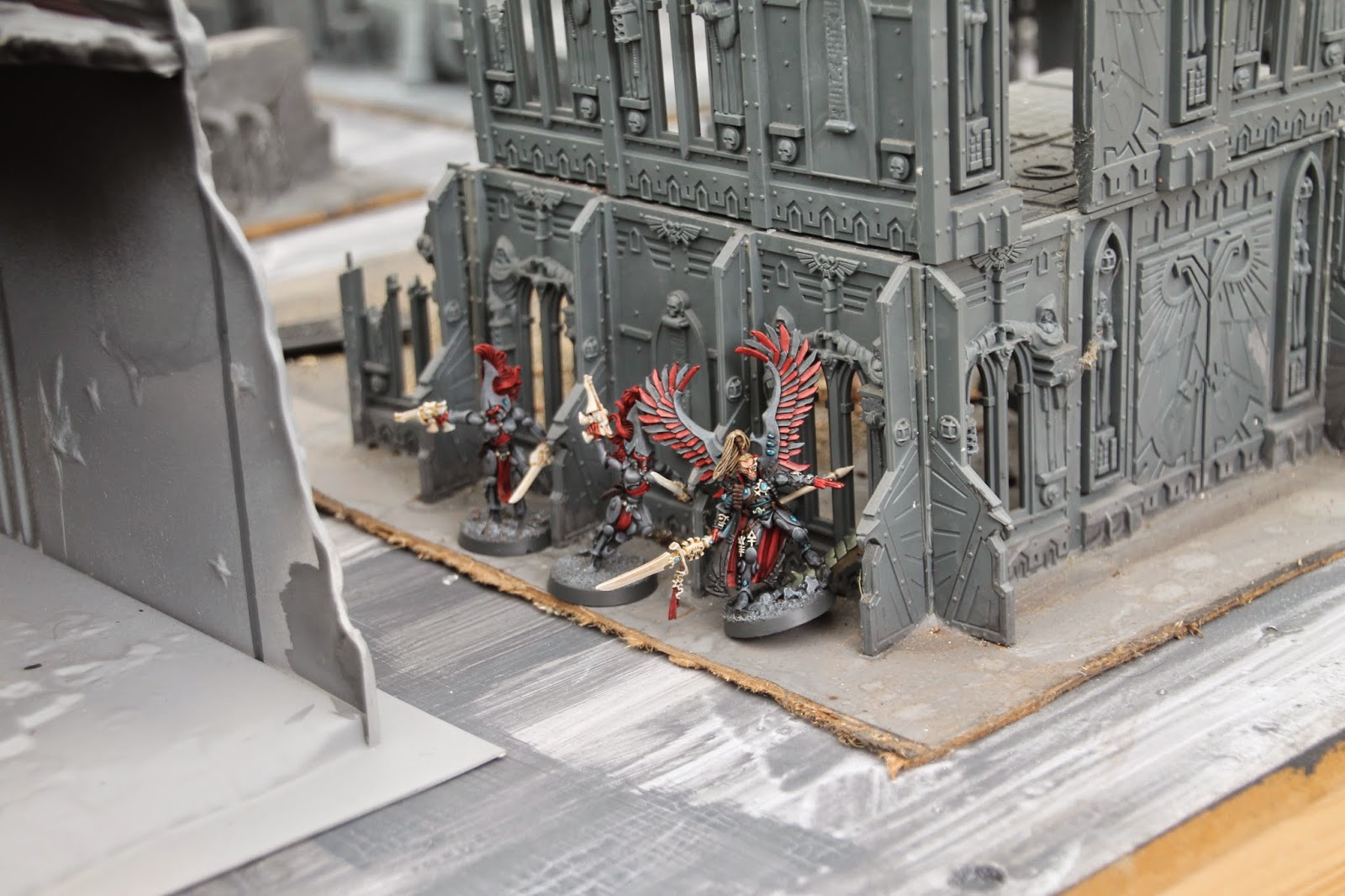 Corsair Prince and ablative blades, calling down the orbital strike on the DKK. 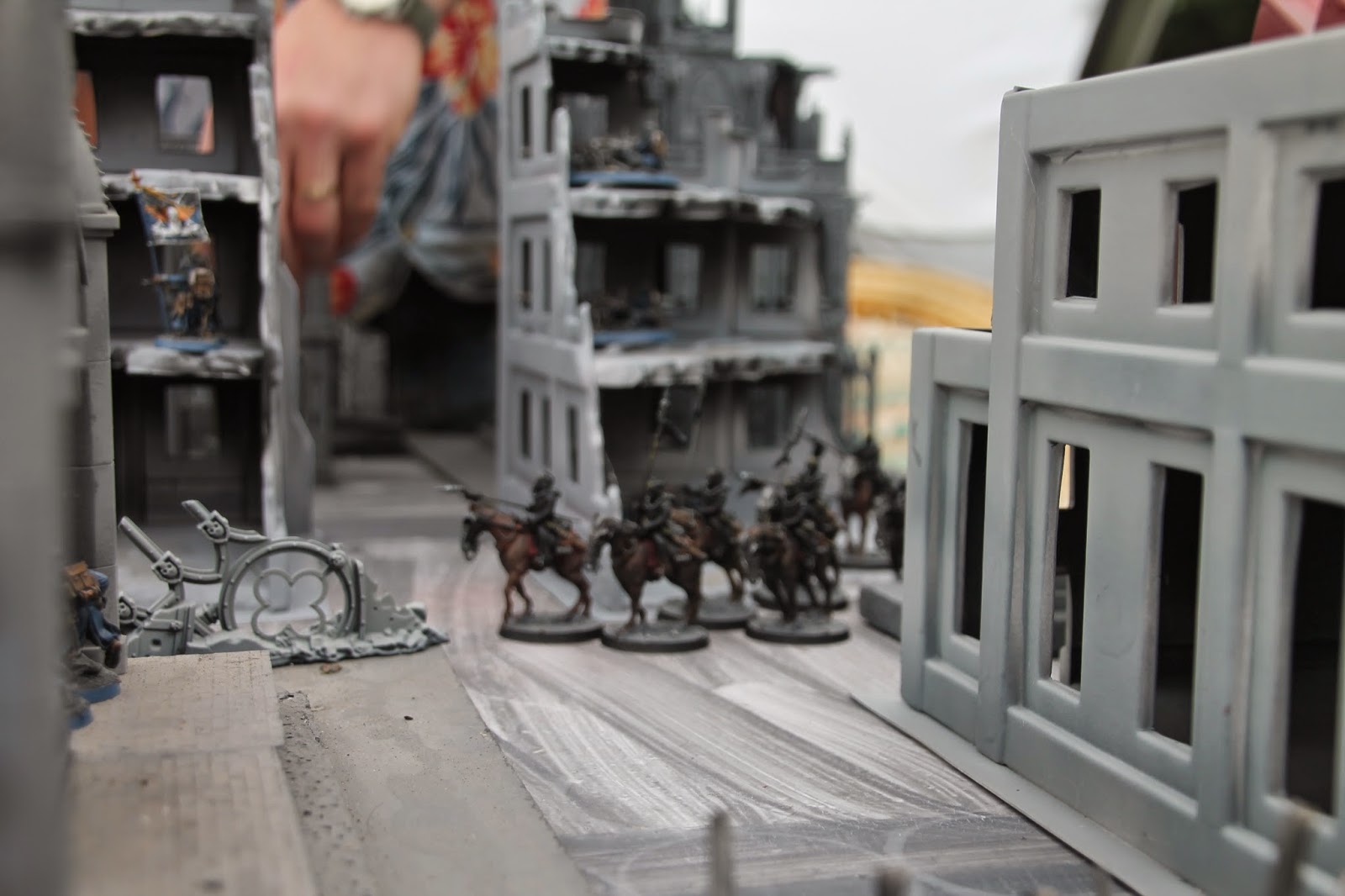 Gee-gees moving up into a different (but ultimately no better) position. 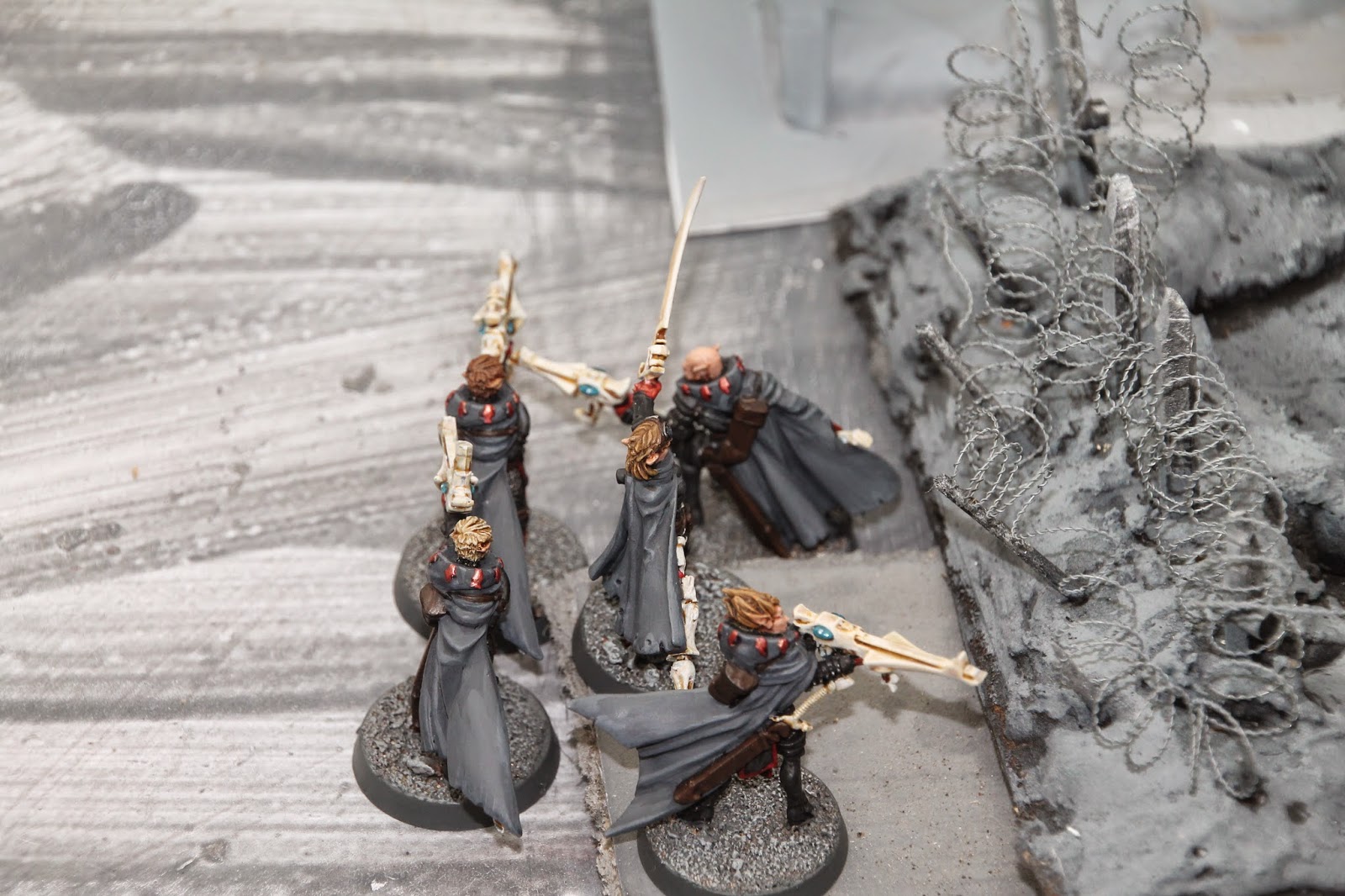 Deep striking corsairs.  They wipe out my remaining infantry squad. 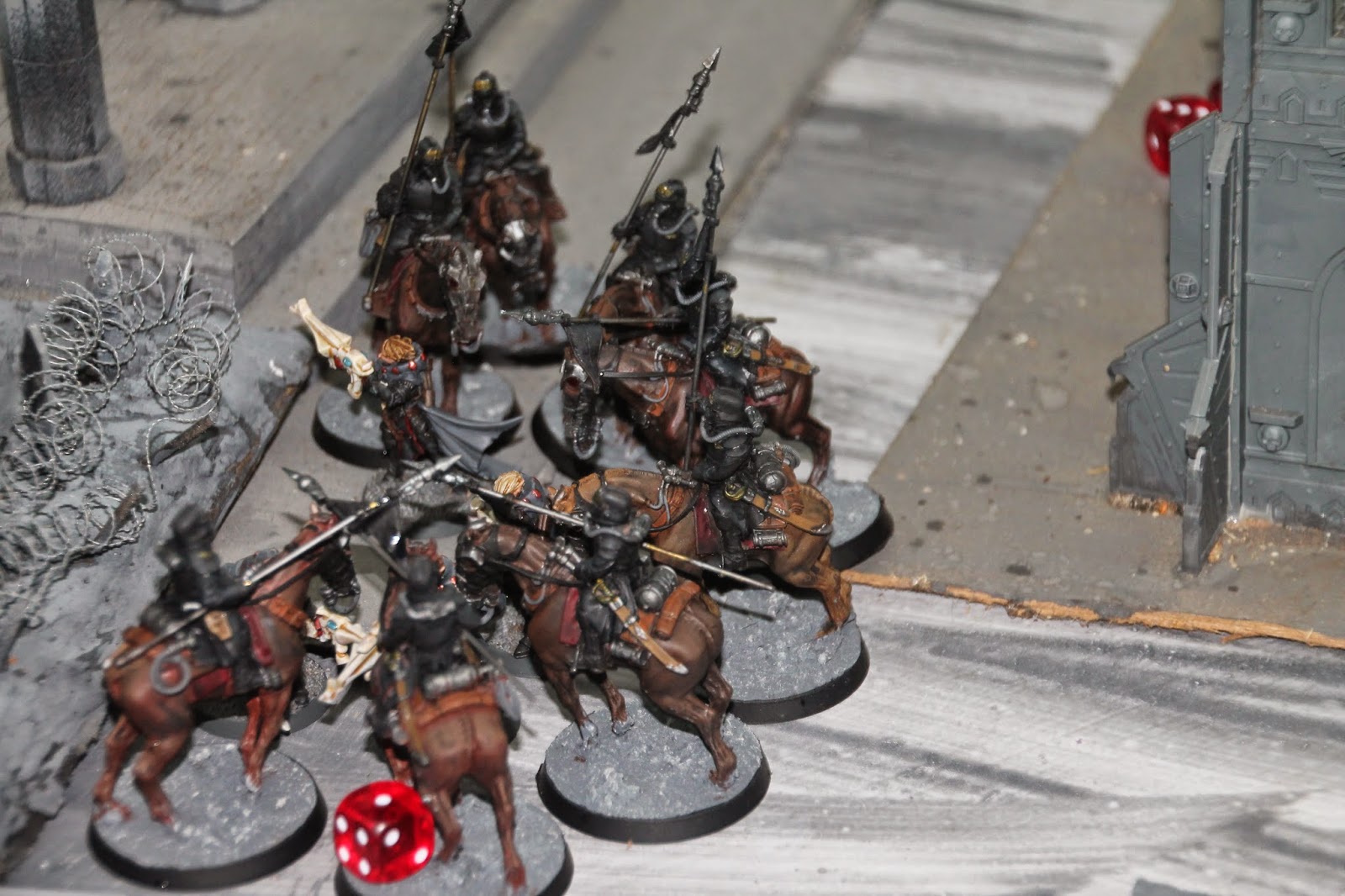 But are then eaten by Death Korps Horses...  true. 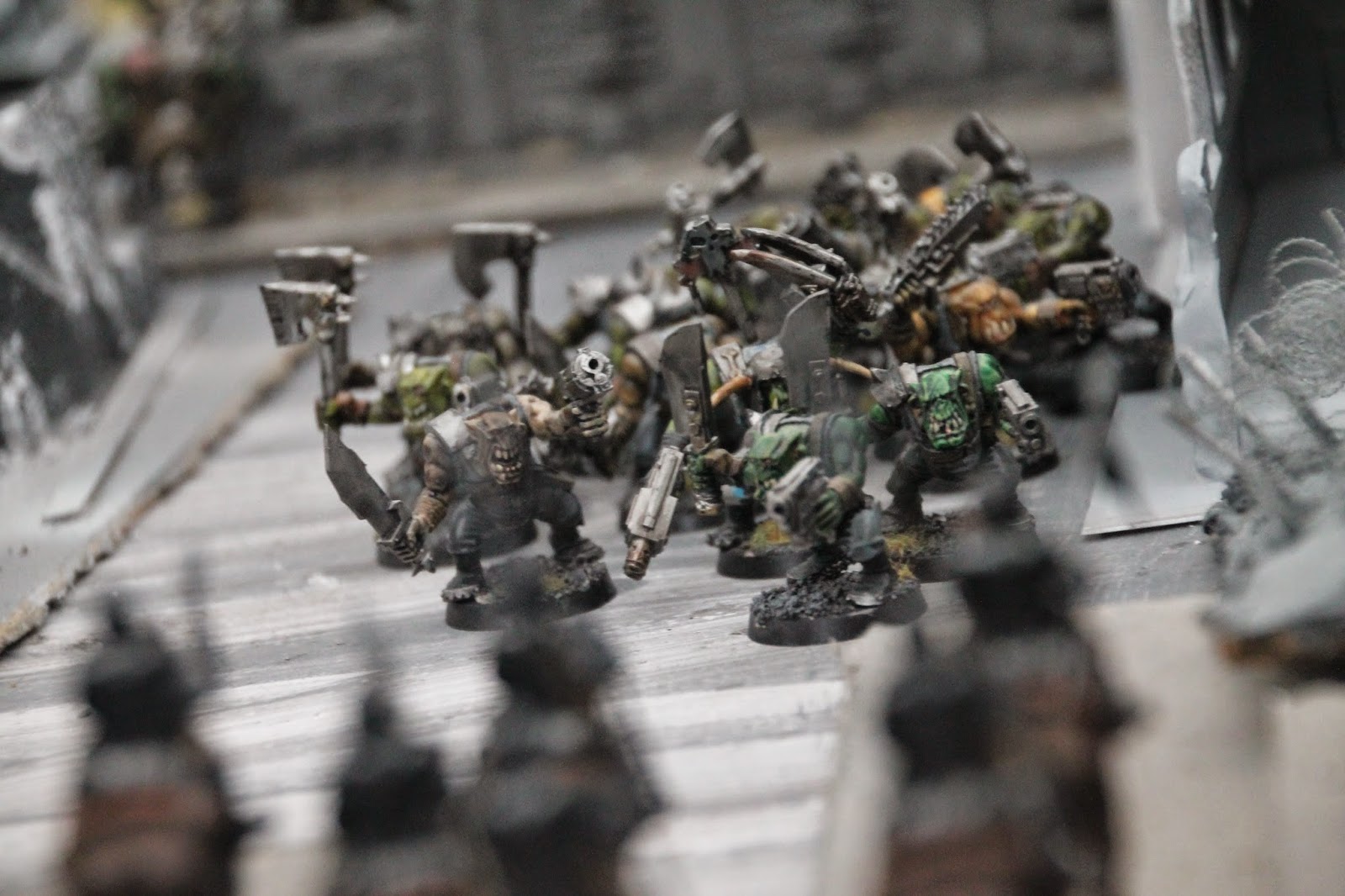 Ooooh, jus' out of charge range, lucky for me. 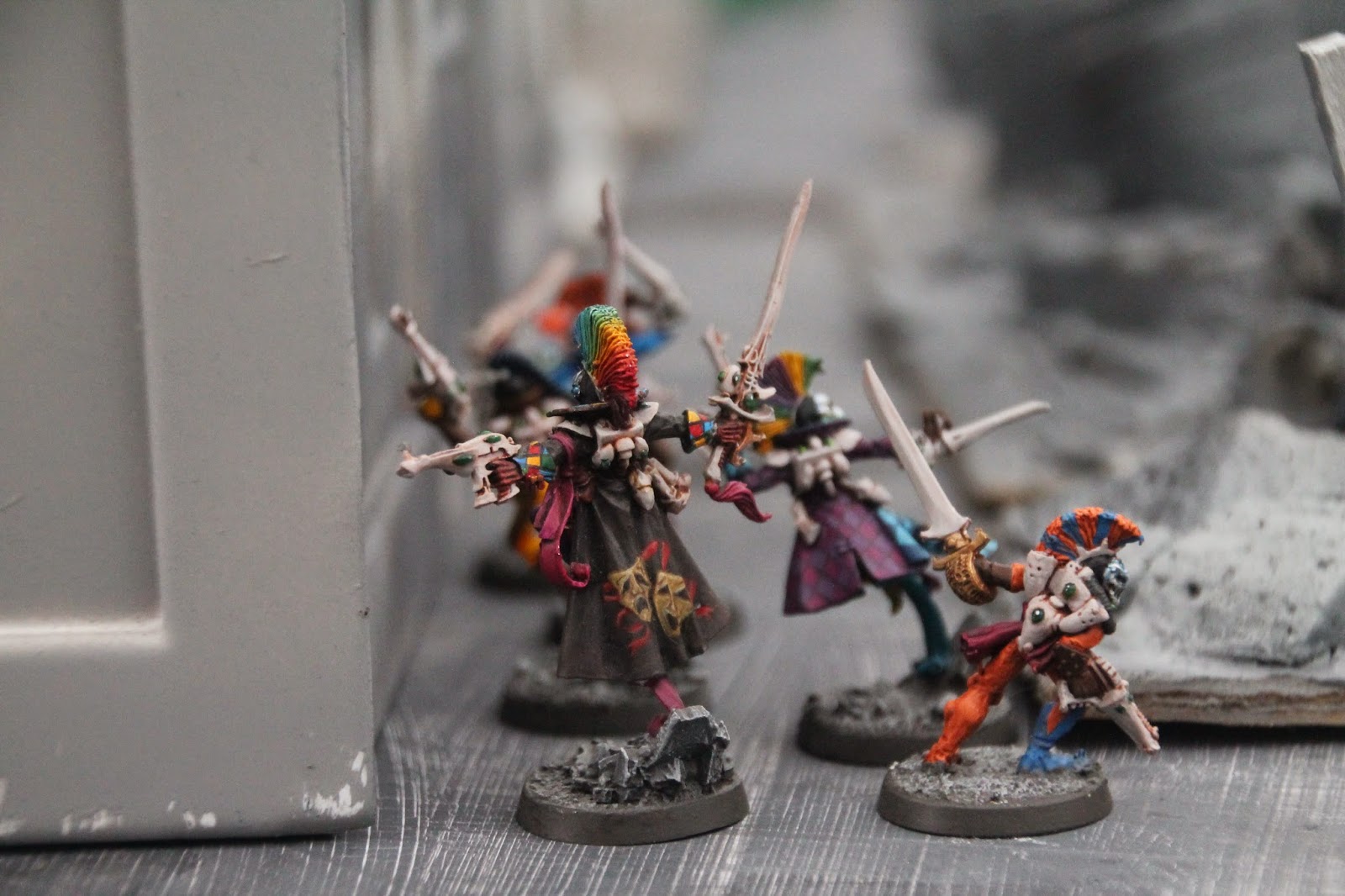 Killer Klowns forgetting that they ignore terrain and thus failing to assault the orks in the building this go. 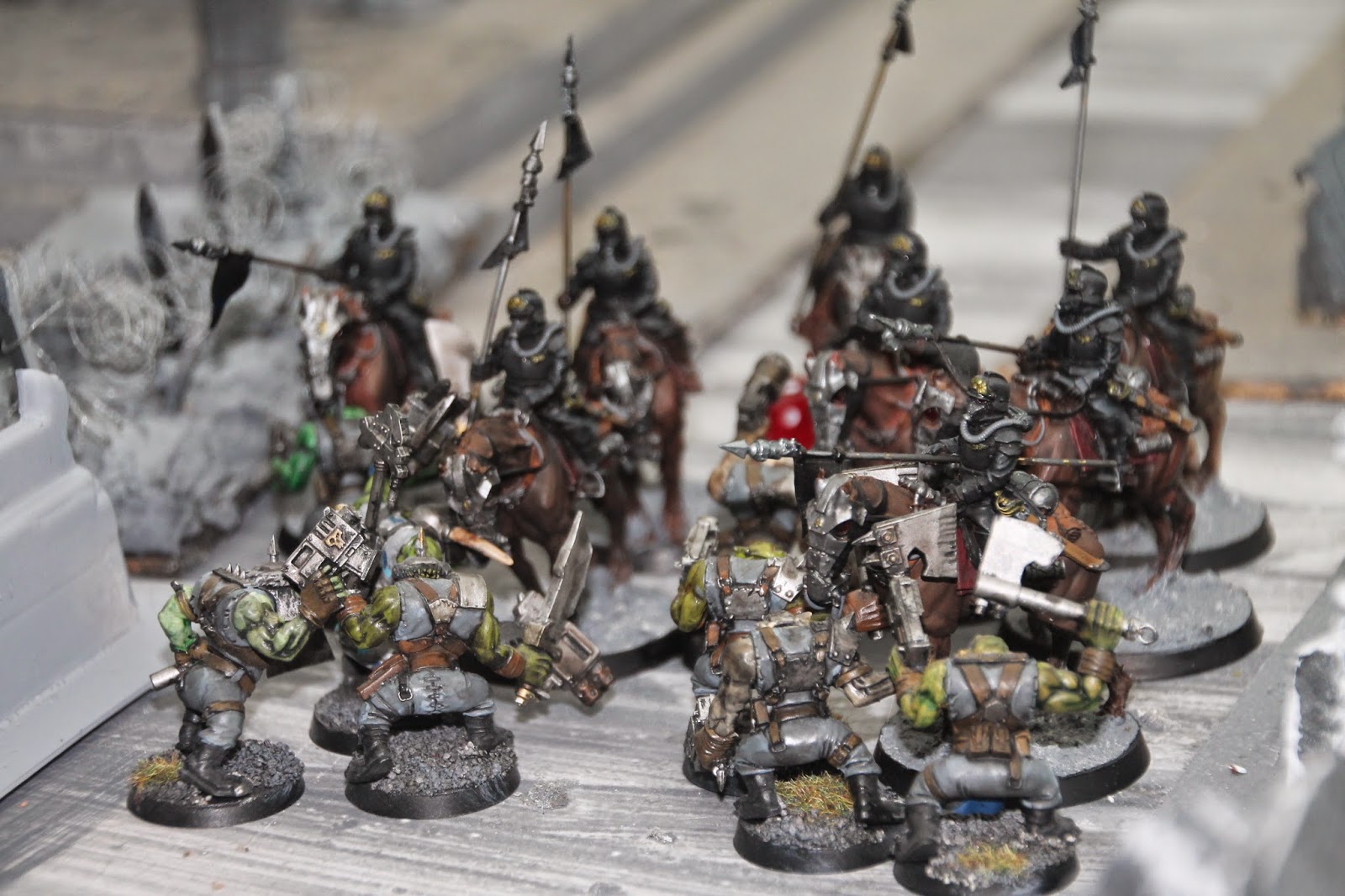 Furious melee.  Ends with all waffenritters chop suey and only the Nob left. 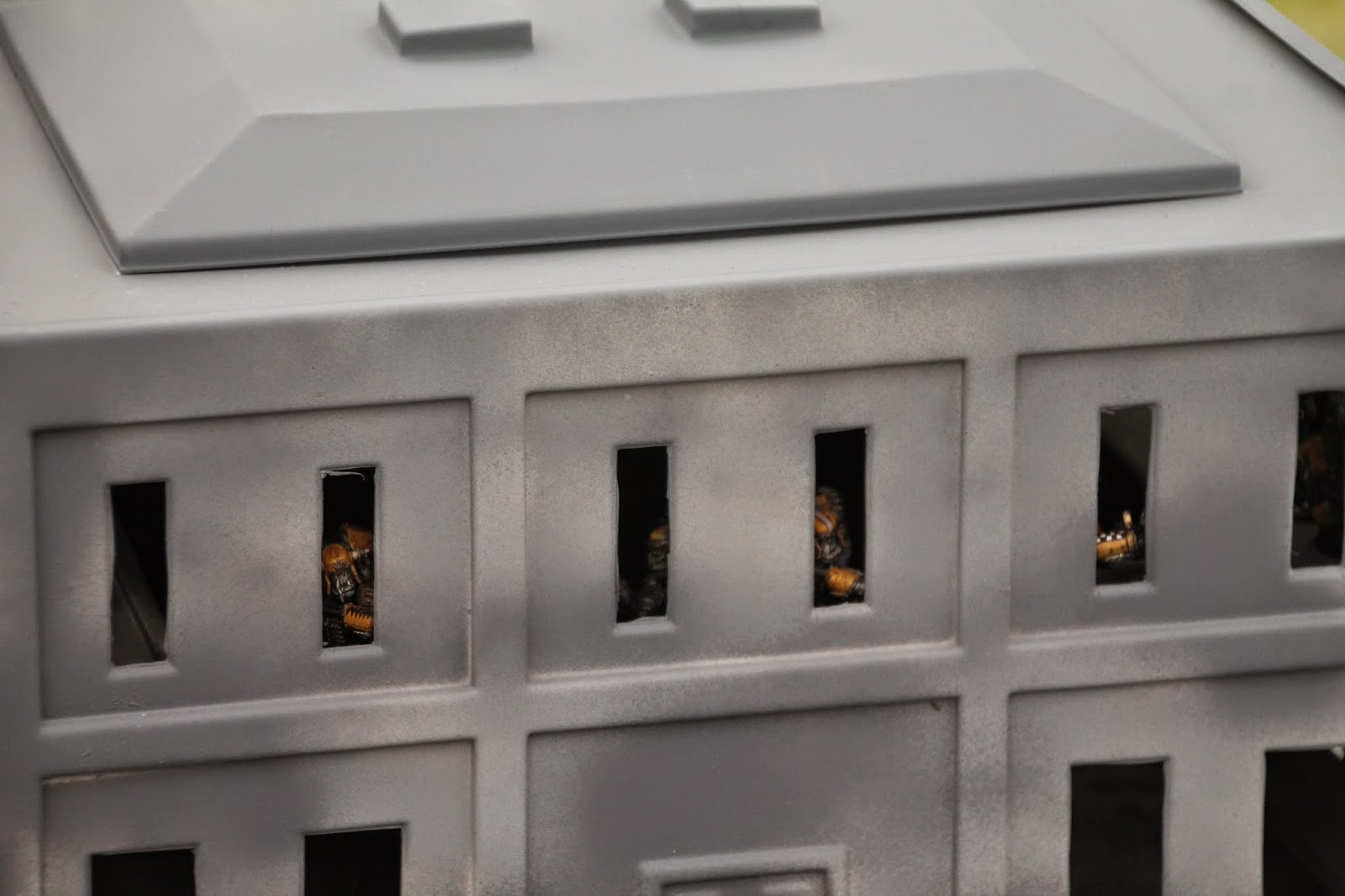 The ones the Harlequins should have got if we'd have read the codex properly.  Sneaky orks. 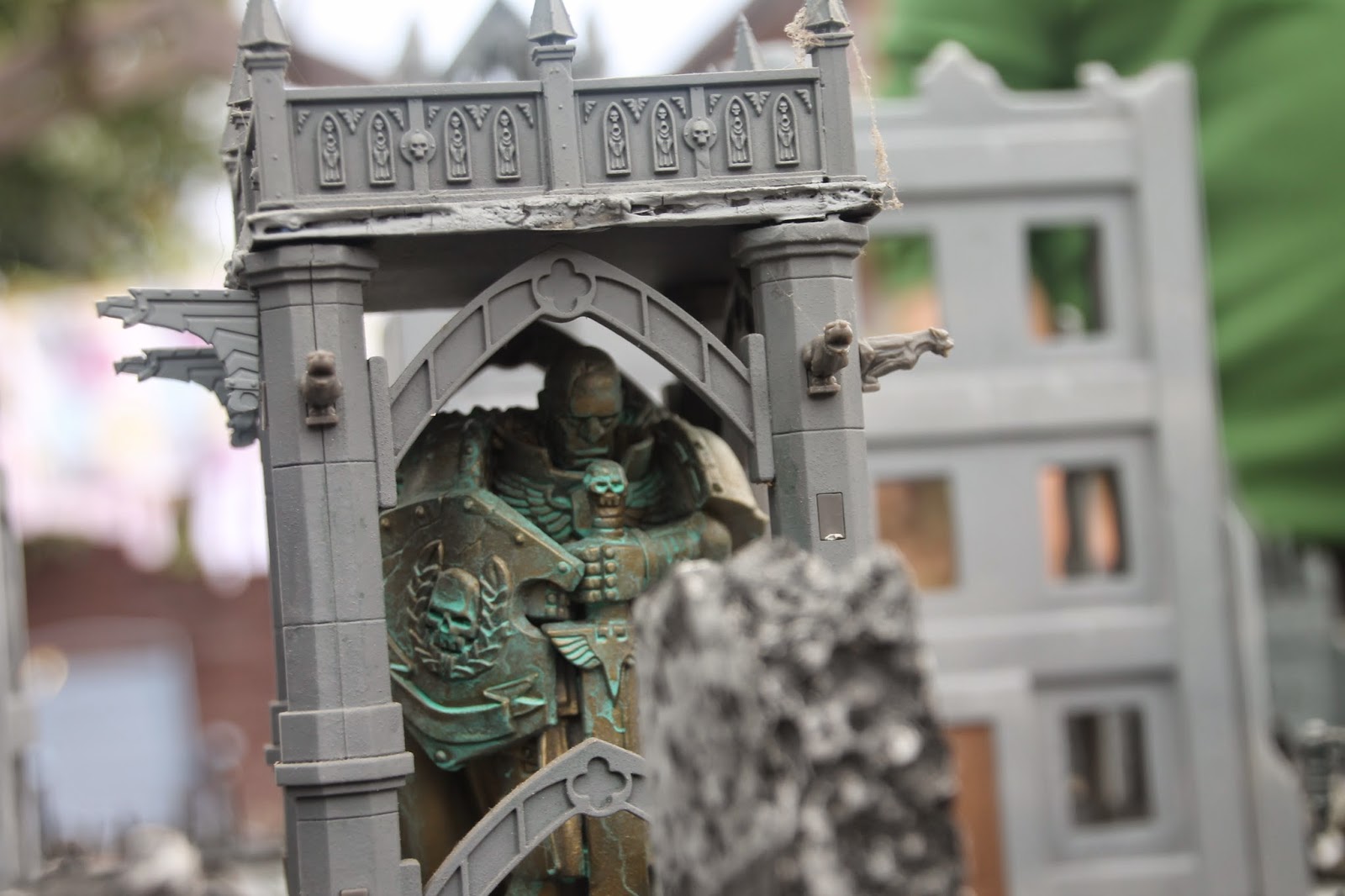 Sticky out bottom lip.  How apt, yet gauche at the same time. 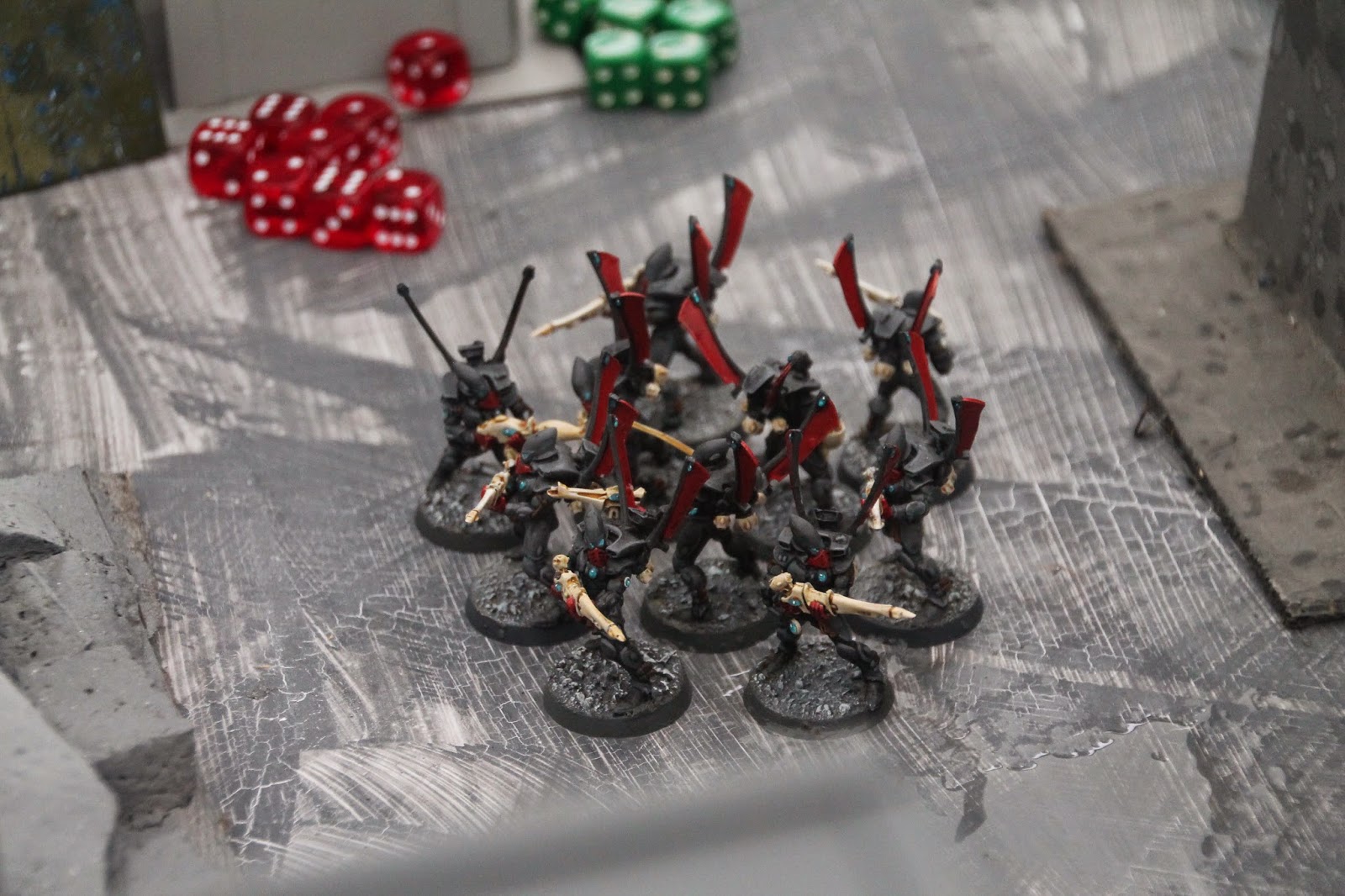 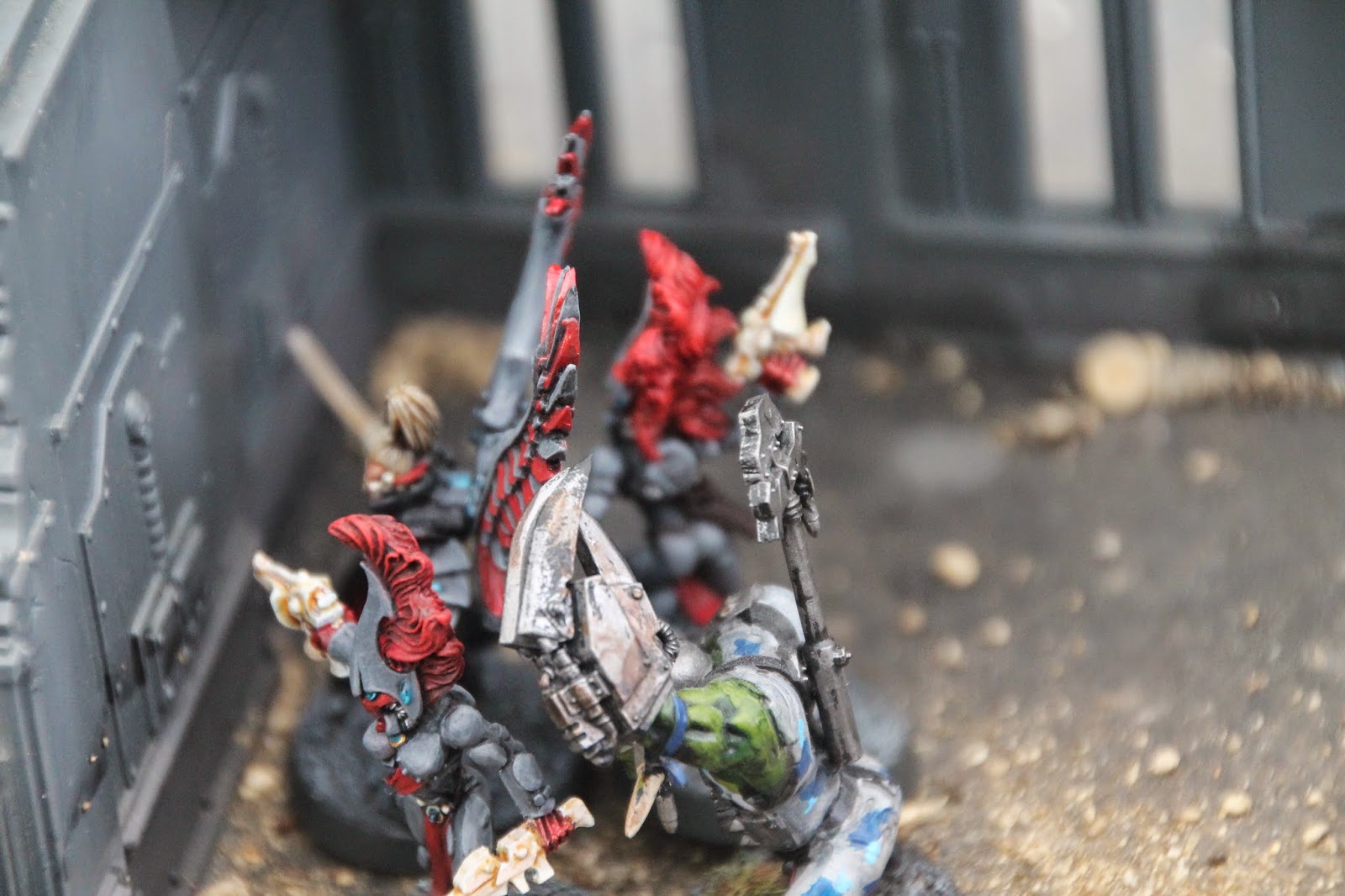 The last Nob.  Except the warboss, who was the only boss left at the end, the gallant Unteroffizer and the Corsair Prince both ending up deaded. 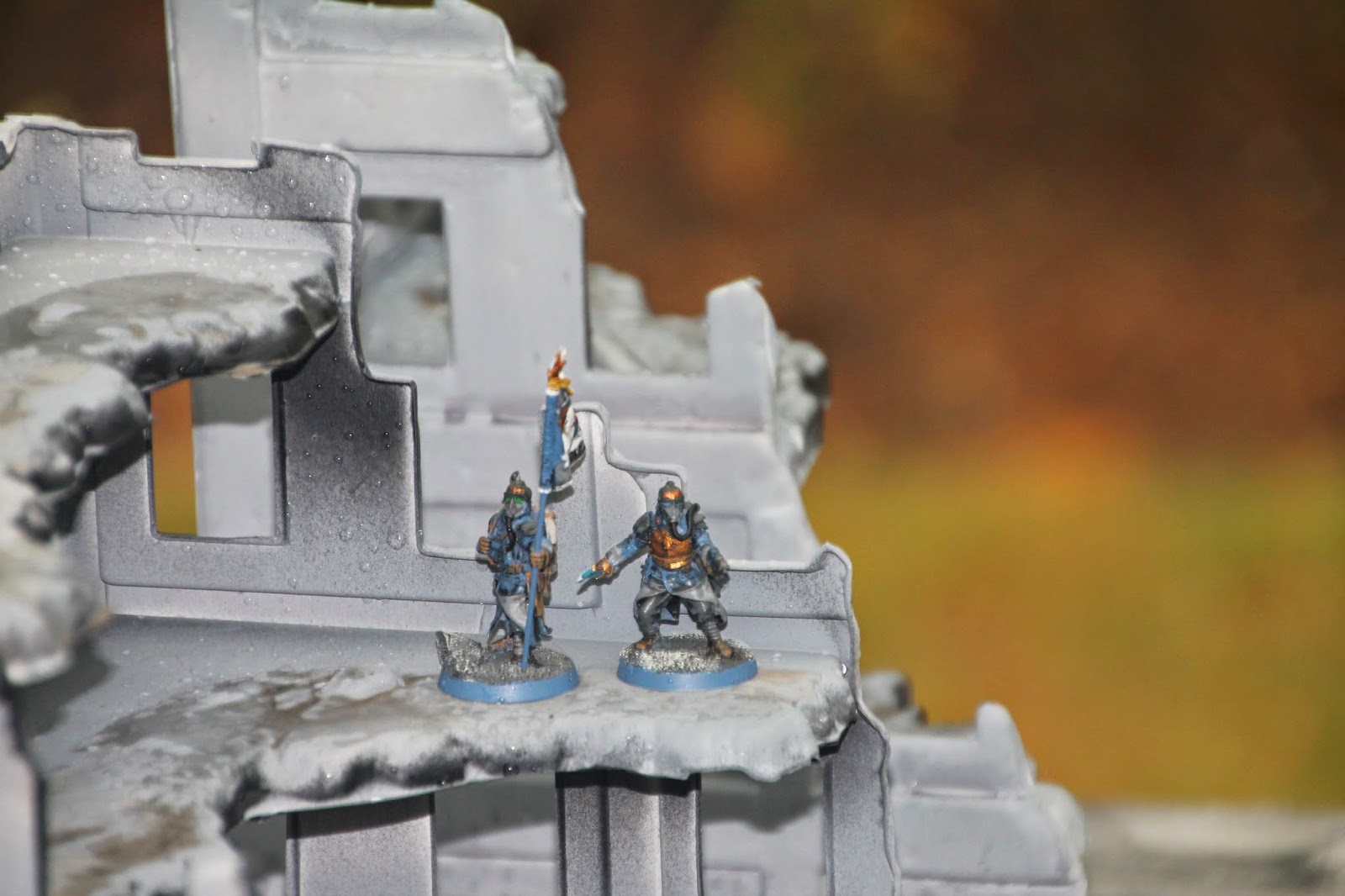 I ended up with just Unteroffizer Z and the standard bearer left.  At this point, in a not particularly DKK fashion, I tried to run away and was gunned down by shootaboyz.  Oh well.

An excellent game - on an open board, I'd have gunned them all down.  On this board, the orkz reigned supreme due to Admurul Drak deploying more or less in the middle.  There'll be a next time.  Anyway, we cleared this all away and had a swipe at the plastic crack mountain.  But generally agreed that for fun and spectacle, Epic 28 is great, but that smaller battles like this are the way to go for multi-side matches.