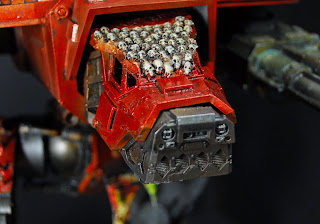 Paint and Pictures by Karitas.  This was entirely done out as a Legio Gyrphonia asset before being turned to the red side.  A labour of love by it's creator - cheers dude !  Anyway, it occurred to me that it hadn't actually been shown off at all, so here it is in all it's skully glory: 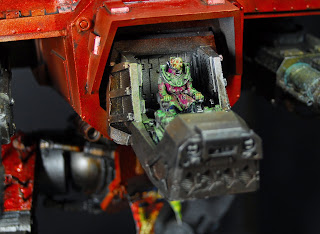 The red is actually slightly darker IRL, I think it's the lights cutting through the paint to the yellows and greys underneath.  Perhaps. Anyway, I'll leave you with the tale of woe that led to the creation of this fearsome beastie: 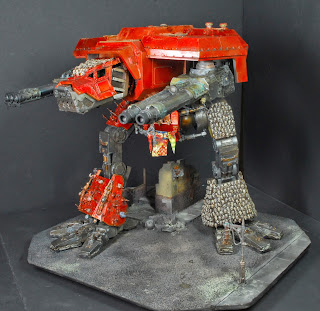 As a part of the Imperial response to WHAABurket, eight hundred years ago, the Titan Legion Legio Gyphonicus, sent a small maniple as part of the larger Mechanicus contribution to the war effort.  The one Reaver and pair of Warhounds were pivotal in keeping the Orks within the San Cantor hive area.
For reasons not remembered, the Fabricator General of the Adeptus Mechanicus ended the campaign in command of all imperial forces.  A substantial Mechanicus garrison was intended to secure the Devos System as it was a major trade port (and indeed, food producer,) for Agripinna and hence the Fleet Obscura.  The Legio Gyphonicus would return to collect their damaged Warhound as soon as they finished their next urgent assignment.

The Garrison was left with one damaged Warhound, the Canis Fidelis, to guard whilst the main Skitarri force was redeployed to face another threat somewhere else.   The Ork menace from the San Cantor rubble field resurged, along with a requirement for reinforcements for the Skitarri armies elsewhere in the sector.  With over half of their military capacity and entire supporting arm stripped, the remaining Adeptus Mechanicus contingent, now supported entirely by (and effectively becoming an elite arm of,) the PDF, set about their task.

In the event, only by calling upon the damaged Canis Fidelis were the Orks contained.  The Fabricator Captain of the remaining mission, Magos Ptolomy Inx was slain by storm boyz at the climax of the battle; the Canis Fidelis was rendered immovable as it assaulted the crater formed by the Rok, where the heart of the San Cantor Hive had been.

The Legio Gyphonicus sent an Ark to collect the Canis Fideliseighty three years later, but the location codes had been wiped as a security measure by the PDF.  The crater, irradiated remains of the Rok and the rubble of the Hive all combined to hide the Canis Fidelis from its potential rescuers.
The Machine Spirit of the Canis Fidelis was not happy.  It had seen its fellows from the original Devos task force maniple repaired and then taken on to their next mission.  It knew that the Fabricator General had left.  It experienced pain as it walked back to the Rok for the last time to face the greenskins again.  It felt its Princips and Moderati die and watched as the stormboyz slew Ptolomy Inx.  It felt abandoned.

Canis Fidelis became, in its immobile state, an object of veneration, indeed, a god, to the scavvie population of the San Cantor ruins.   A population of mutants and scavangers formed from the remains of the Hive population and remnants of the Adepts and Servitors whose last command from Ptolomy Inx was to serve the Warhound, keep its location hidden from enemies and serve its needs.  Through these minions, Canis Fidelis knew that the Legio Gyphonicus had returned to rescue it and had given up when their first search had failed to locate it.

At some point the abandonment turned to anger.  Canis Fidelis had passed.  Encouraged by its worshippers, Belligera Rex emerged.   Driven to constant war by the remnants of the Orks, Khorne soon found converts in the ruins of San Cantor.  As the wrath built within the Machine Spirit of Belligera Rex, so did its need to become operational once more.  It’s minions were set collecting code.  It would walk again. 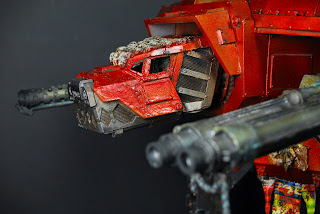