Leader of the Skulltakers, a World Eaters sub faction.  With a hell beast lurking in the background. Zhufor the Umpaler even has angry face on his hat. 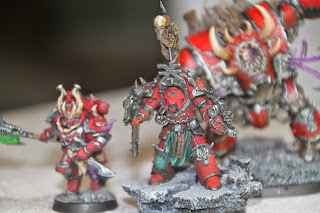 The Aspiring Champion, Riffla Victor, is a rising star in the forces of the arch enemy and may well be seen leading the 'zerkers, despite being a Word Bearer.  Whereas Zhufor still has his bodyguard of Zerkinaotors, just as he did on Vraks. 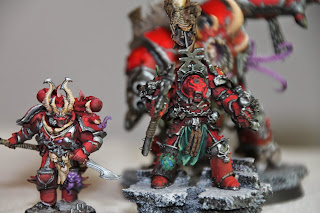 Zhufor may well just be a blood crazed homicidal psychopath, but some how he recognises the DKK from somewhere in his past.  Obviously this makes him angry (angrier ?).  Go figure, as the word bearers would say.

Anyway, he's basically after Belligera Rex, a Lucius Pattern Warhound which was 'lost' by the War Griffons and has spent the last 800 years being slowly corrupted, was basically being worshipped as a God of War and Destruction.  These things can get right into one's machine spirit after a while.