Ok, this is the first trawl of the bitz box.  First up is this arco-eviscerator. 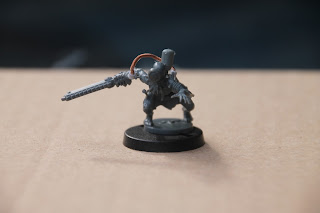 The new bit here is the cable and socket from Zinge Industries.  There's another mantic ghoul based one to make and then nine GW ghoul based ones.  Having bought the Zinge cables, there are no more bitz to buy, so this invaluable addition to some =I= warband and his ten fellow arco-eviscerators are a 'win'. 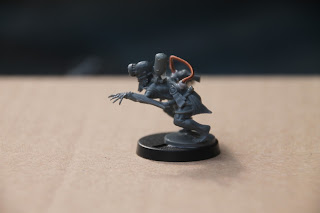 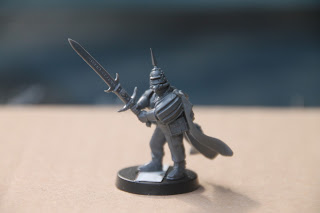 This guy is a random Crusader, the only bitz here are the Empire greatsword arms and Ad Mech head. I'm liking the attitude. 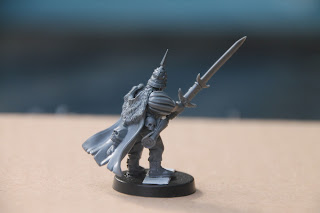 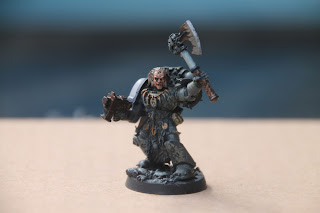 Random SpaceWolf.  He was the standard bearer whose standard is now the Saranian army banner. He needs a bit of TLC; twiddly bits on the axe shaft and some pack badge on his near white shoulder pad.  Which SW transfer goes on a white shoulder pad, I wonder. 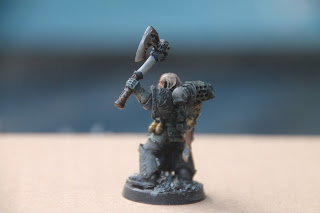 And now the Iggies.  First the NCOs: 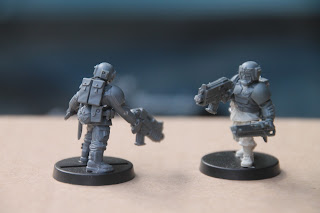 Two bolter armed sergeants.  Note bolter ammo pouches worn on the back.  These guys are the leaders for the next bunch; 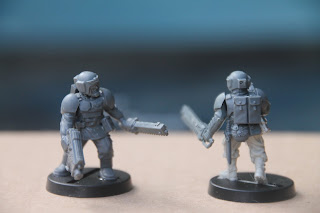 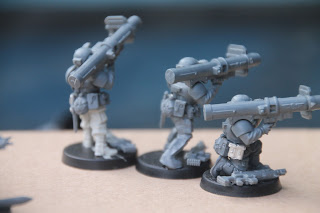 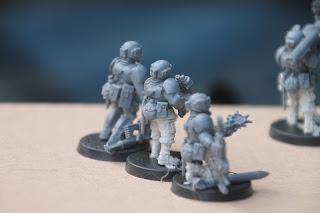 One squad of three MLs.  Some of the spotters/loaders have extra ammo pouches for the squad leaders' bolters.  Most of the figures are wearing extra pouches from Pig Iron.  No extra bits bought for these. 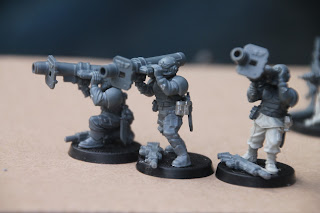 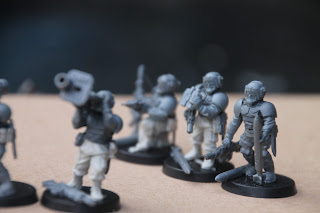 And the next squad, Squad Dvina: 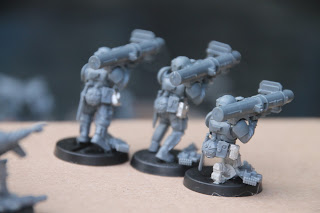 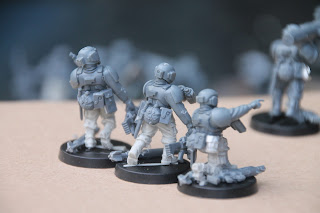 As before, all of these Iggies are wearing the visor and microphone head from the vehicle accessory sprue.  The build details are as before.  These missile squads will be local air defence for the foot sloggers, hence the mix of binos and auspex. 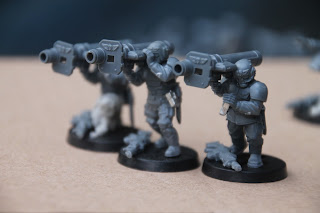 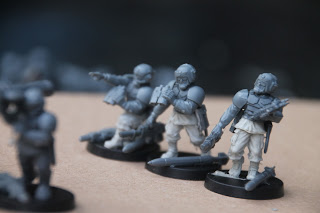 Dvina and Rapier are both AA missile systems, hence the names for the squads.

There's lots of stuff in there, it's going to be a long time before the boxes are empty-ish.  There's more Iggy bits, Edlar bits, vehicle bits.  All the left over stuff and flotsam and jetsum of my existing armies. It's going to be long but interesting trawl....

........For instance; I have a collection of DKK small arms left from all of the DKK project-y stuff.  So two boxes of early war Warlord Games Heer and sufficient VL Tannenberg heads gets me a platoon of Paladian Guard  See how easy it is to use up the bitz from the box and get another unit ?

In other news, packing away the armoured assets today, I fitted the turret rings to all of the DKK tanks.  By way of explanation: FW Mars Alpha Leman Russ hulls have a big hole like the old Leman Russ kit.  FW Leman Russ turrets have a re-modelled peg to fit the new Leman Russ kit.  So when you buy a FW tank kit, you get a sort of doughnut piece.  The wizards at FW have made it to retain the FW turret in the old Leman Russ hull, which means its actually a gnat's bollock too large for the opening in the FW hull. So they need shaving down, a decent chamfer at the bottom and then a gradual shave up the sides.  So fitting thirteen of these two years after they were painted is another tick in the 'completing the project' box.

The Raging Heroes (so badly named - hero is the male, they should be Raging Heroines) TGG girls have all gone to their various new homes for assembly and painting. I'm hoping to hear some news about the first bunch of Blood Pact soon.

And trawling through the boxes has elicited more bits for the Blood Pact.  So those are now set aside for that purpose.  My existing Cadians are going to be re-painted to match the camo-cadians - greater homogeneity for the overall army.

What with the Valkyries now actually 'flying' on their flying stands, it does sort of feel like the army is starting to feel a bit more complete.  Sure, there's bucket loads still to do, but each extra miniature cobbled together from what's left in the boxes is one step closer to eventually binning one of those big boxes and having some more space for boxes of completed minis.