Summer is here and it's been hot and sunny all week (mid June), so I was looking forward to getting all three tables out and seeing just how much IG there is lurking in the corners of the garage. 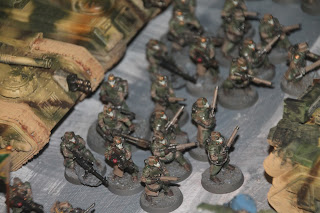 But it's Saturday, so it's raining (sad face).  But it's not the end of the world (any world), as I can still fit two tables up in the garage and see how far I get.  I'm starting out with the DKK, cos they don't get out much. 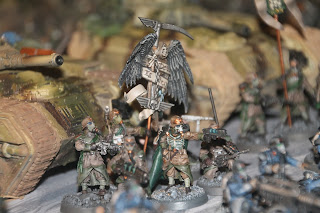 As it is, they do fill me with a sense of joy and fulfilment as I get them out and line them all up. 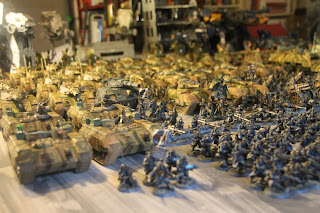 The odd coloured tank is the commissar's ride.  A small bit of 19 Armoured Regt massing there. 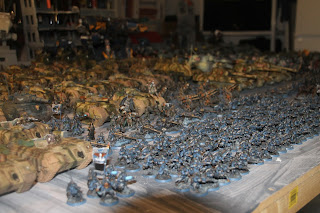 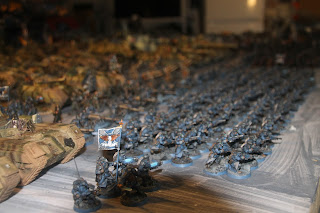 They stretch off into the distance... 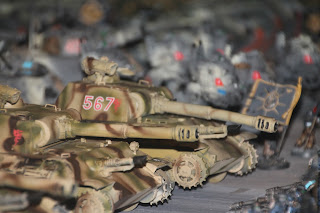 King Russ (still without tracks).  The banner behind belongs to the Valhallans.  He's the only Valhallan on the table. The ASL Sentinels are behind him.  Sentinels are bonkers, IMHO, but if you play guard, you gotta have 'em. 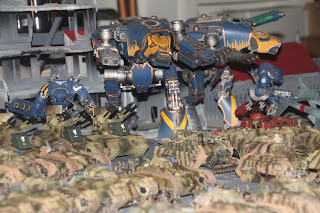 Phyladi Alpha and Phyladi Beta, flanked by Chas and Dave, whose job it is to prevent pesky undesirables from reaching the Warhounds.  This pict shows the 'hedgehog' hydrae and the Ad Mech AA Whirlwind as well the DKK & Dneipr Engr Assets. 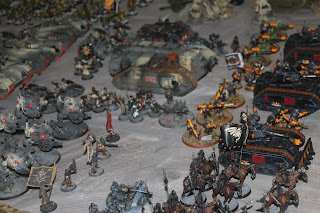 902 Div HQ with Gen Commandant Welbahn standing on a mule for a better view.  Note the Mordian 7th Iron Guard mechanised platoon in front and the Death Riders to the bottom of the pict. 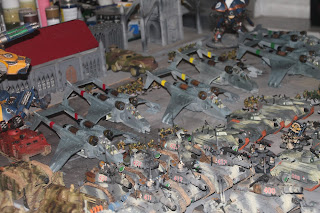 This shows the bulk of the ASL in front of 36 Tactical Lift Wing with Elysians squadded up ready to embark. 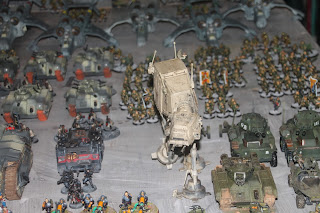 2nd Corbanian Regt behind the Cadian Recce assets.  Inquisitor Dredd is there with three of his most suitable henchmen and a Rhino from the Ordos motor pool. 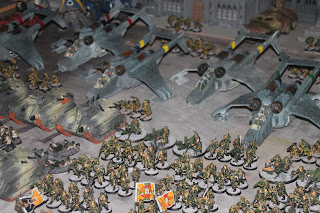 Another view of the Corbanians.  Elysians and ASL also in this pict. I need to put the numbers on the Valks. 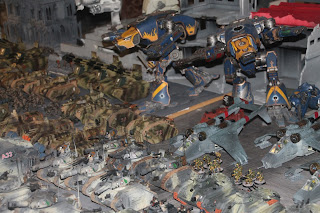 And a slightly longer shot.  I'm disappointed that:


So my aim of getting them all out didn't happen.  We'll see what the weather's doing tomorrow.

Update: So I put all of the infantry away again (sigh).  But did get done: