Stock taking the forces of freedom and self determination.

Happy new year.  I like my Iggies and thus creating that stock take list I put up just before Christmas was pretty straight forward as I know more or less who they are and what they are (in list terms).  The forces of freedom and self determination (the renegades and heretics) get, let's face it, a bit less love.

So I had a night without Mrs Z or the little people.  The resulting picts are a bit poor, but hopefully will show the formations in good enough detail for a casual illustration.

Coming up in the next few, written before Christmas posts, we have the PDF 13th Mechanised Infantry (not - Catachans), who at the minute still lack the APCs to fulfil their role.  But that's for the future.  The PDF 99th Line Regt "The Bloodcoats", who have been a part of Devos IV since 2009.  And then the Blood Pact, who are recent addition to the melting pot.

But we start with a mob of mutants (from IA5's heretics and renegades list). 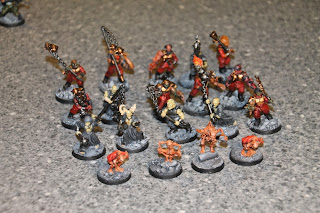 They look suitably weird and variable.  Painted by Mr Lee.

Other single squad units which could go in here include twenty Chaos Hounds (they are in the EoT 'dex), a squad of ten beastmen (IA 7 has these) and some nurgly servitors (counts as plague zombies).  So there's another post for later on when I can actually remember where they are.

Then the Xyphonica Militia (Zovures).  Who were featured earlier in the year.  Functionally, I'd run these as Astra Miliwhat Conscripts in an allied formation or something.  No idea what the "noo roolz" allow, but meh, that's what I've done for ever... 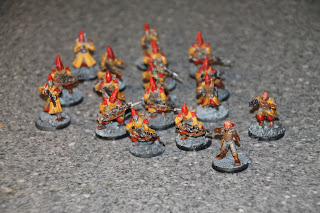 In the infinite monkey cage of our world, enthusiasm can triumph over competence; hey 2016's elections prove that, but possibly not on the battlefields of the 41st millennium.  So this a 21 man speed bump; one heavy stubber and one rouge psyker. 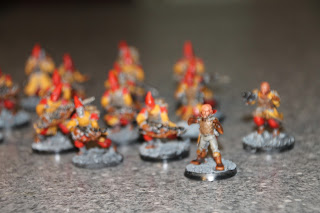 But also, check these out.

And if you didn't see the MLP space marines.  The news article is here.
Posted by Zzzzzz at 00:18