First up on the Brick of Scrutiny are some finished models.  "Ah, it must be Christmas, Zzzzz has finished something.  But no, it wasn't me; Siph Horridus from Wee Men did these for me in exchange for some Sisters of Scissors. 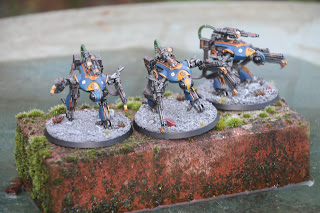 For those of you unfamiliar with such things, these are FW's Vorax; which are horde killing hunter droid.  Their aesthetic is based on the 'Crusader' robot from the old 1980's robots.  For some reason, they don't get pushed like some of the other FW robots. 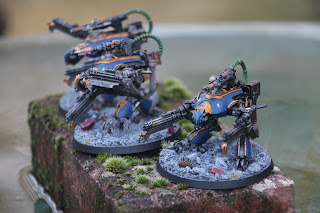 These are obviously ancient assets belonging to the Ad Mech tide to the Legio Astorum, proudly wearing Warp Runners colours.  Unless you're tanks, plural (and even then, the Lightening Guns mean that's uncertain) then for the time being, the BoS is safe. 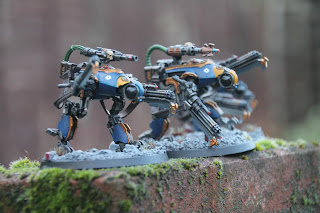 And just for scale, there's a Tech Priest. 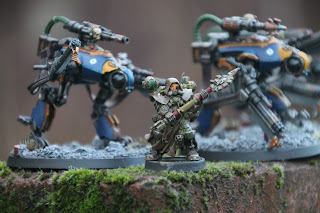 Many thanks to Siph for these - If I had the skill to assemble and paint these (they are fiddly kits) then I'd be sorely tempted to get some more; their sinister purposefulness makes them very attractive little models.
Posted by Zzzzzz at 21:36