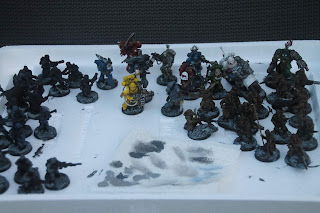 So you've seen a whole lot of nearly finished stuff;  There's a thing that Aussies call an 'eskie' (probably short for 'Eskimo', some of the ex-convicts having stolen some of the other letters), mine arrive full of frozen dog food.  This is not an accident, I do buy them deliberately. 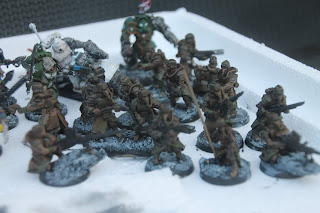 The lids, once the dog food is in the freezer, make for handy trays to move little men around on, and I have a never ending supply of them.  So the these are Grenadiers who just need a tidy up before they've done. 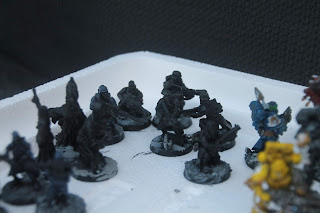 The weird looking fellas in the corner are zealots from this Kickstarter. 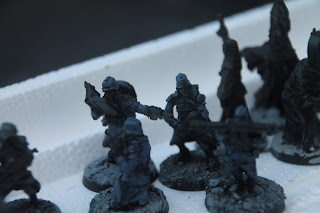 Blue Krieg for the Field Arty - I used Fenris Grey (its blue) but obviously didn't mix it mixily enough as it started to dry all shiny and quite the wrong shade of blue.  It was a disaster.  Out with the Shadow Grey (its blue) to try to rescue the paint job. 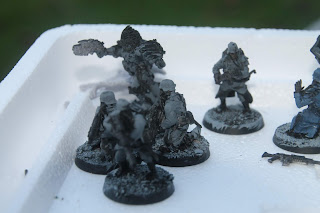 Grey Kreig (they're grey - it's in the feckin' name GW !) will need the mustard facings next.  And the random Space Wolf will also be grey, because that's what colour space wolves are.

So that's how I do stuff in the winter - trying to do stuff by the warm mood lighting of the living room, which then always needs correcting when looked at by the light of day.  C'est La Vie.
Posted by Zzzzzz at 22:11