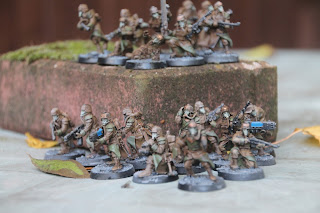 These are the repainted riflemen from the accidental large lot I purchased some time ago.  Now the plasma guns are unfinished, they still need two drybrushes with increasingly pale blue. 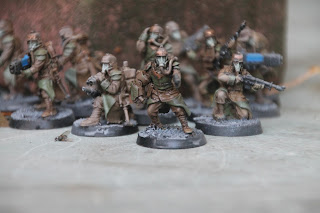 The Lt, his power fist a conversion by his previous owner.  I sort of like the way it hangs, he's carrying it as if it is heavy, as if he has to keep it away from his body incase it goes off.   Whilst we're on the subject has anyone who has ever done MA or re-enactment ever given any thought to how a power fist might be used by an iggie ?  It would seem straightforward for a space marine, less so for a guardsman..... (?) 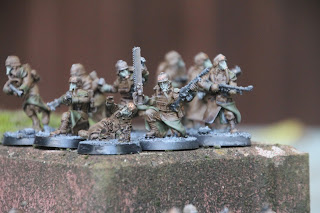 Sgt waving chainsword.  Another bonkers hang over from the Sunbeam Rd version of GW.  There's a reason these things are tools for cutting wood, not weapons for chopping up people.  Just how fast would these things have to spin to be efficacious ? 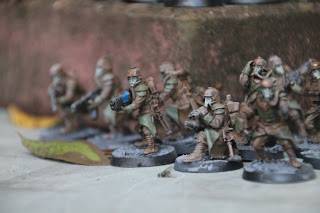 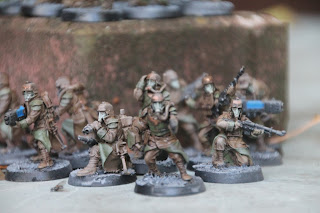 Once again, quite fun and reasonably quick to do. 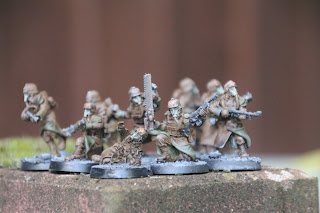 And not too many conversions here, either. 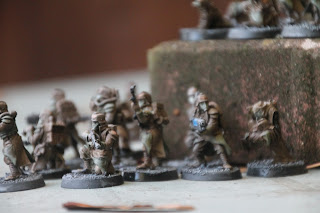 Gonna need some more Chimerae to ferry these guys around in.  Not on parade here are the QM, his tally man and the platoon standard.  All of which need a bit more work. 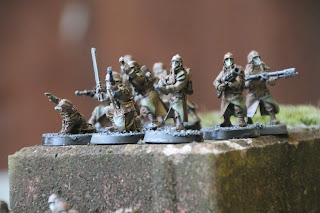 yep, that flamer is missing it's fuel canister.  Every time I got to him doing another stage I though 'Oh I must put him aside and get him a fuel canister...' Oh well.
Posted by Zzzzzz at 01:46