Colonel Nevets (Doggel Tymm Nevets to his mum) was the Chief of Staff of 256 Imperial Guard Battle Group on Shimmergee II when the Imperium evacuated "all" of the Astra Millitarium assets prior to exterminatus.  The former commander of BG256, along with all of the other formation commanders, was arrested for dereliction of duty and assigned to a penal unit somewhere in the Cadian Gate war zone.  Of course, in common with most other situations like this, the Imperial loss of a world has more to do with resourcing than strategic acumen or tactical performance.

For the newly promoted 1* General Nevets, the big picture remains important.  His combat command, 569 Div, has been deployed as a part of a large, capable force in a well resourced campaign.  His interest in the wider conflict means that he has made a favourable impression with 3422AG who have marked him as step up commander of XXXXIV Corps if 2* General Smagle should become indisposed. 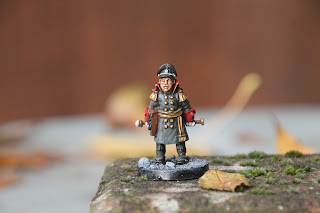 Nevets is a Hjaltlander by birth and a soldier by nature.  He has a natural gift for soldiering and is a successful and popular leader of men, being perceived as fair and competent.  He is aware that he has not had to work as hard as others who are in a similar position.  He's a vegetarian who enjoys performing in competitive tango when time and military deployments allow.  He is as technologically engaged as imperial norms allow him to be.  He always makes an effort to build bridges with the Ad Mech where ever he can.  Partially this is a recognition of their dependency on the Ad Mech to keep the vehicle fleet running, but also reflective of his aspiration to make the maximum possible use of of technology to aid C3 within his formations. 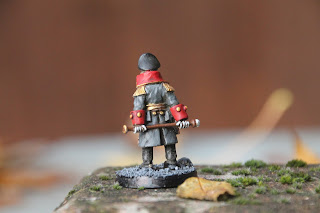 Having adequate infantry resources within 569 Div has meant that he has not had to worry about integrating non-Imperial Guard militia into his formation. Something which he regards as being more trouble than it's worth. Although he does realise that for VI Corps, who are XXXXIV Corps neighbours to the south, do have a critical need for foot soldiers, where ever they come from.

What is a concern, of course, is that all of these militia have to transit XXXXIV Corps (and therefore 569 Div) TAOR to get there.  As the most northerly formation, his commitment of four battalions of 1249th Hrossy Yeomanry to escort the militia through his TAOR.  This set the pattern for the militia transit through the Corps area; keeping the militia moving and preventing them from mixing or dallying unnecessarily.

3422 AG was then not able to report ready to High Command in the expected time frame; with four battalions out of the line, they would be two weeks behind schedule.  However, as Gen Nevets would be the first to point out, VI Corps wouldn't be ready until those same militia were in place, which would be a number of weeks after they'd left XXXXIV Corps area. 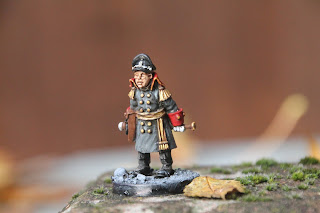