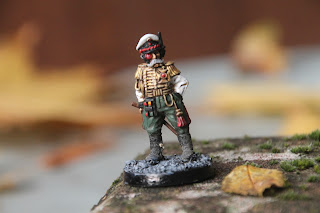 Of course you'll all remember the explanation of what the KCC are doing on Devos IV.   And you'll have seen who actually did the brush work on him. 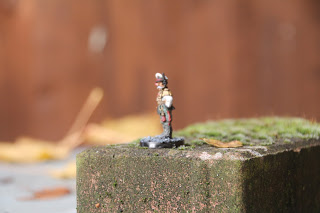 The Regent General is effectively the deputy Plenipotentary for War; in his role on Devos IV, Gen Muntenfor uses his skills and experience to help actually run the war for the Imperium.  The KCC, being a significantly large organisation, has substantial C3 resources which enable 3422AG to function more effectively.

3* General Bisckell Eckrad is a scion of a cadet line of the Tolkhan industrial dynasty who supply (and are enriched by) the Jornathi Military.  Bisckell Eckrad was a newly mustered trooper who first saw operational deployment at the end of the Remit's Maw campaigning. 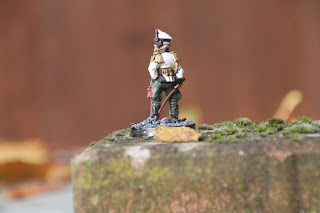 Given the chance, he will still engage the rank and file, telling them, with a twinkle in this eye, that he was once knocked unconscious by a huge Nob.  He is the epitome of the garrulous, fire breathing old warhorse, but that doesn't mean that he is an intellectual or doctrinal dinosaur.  It is partly due to his energy and leadership that the KCC, by the time they are deployed, have changed at least their mindset from Ork control to fighting a heretical rebellion.  He can still learn and manage change, he just looks like he wouldn't want to. 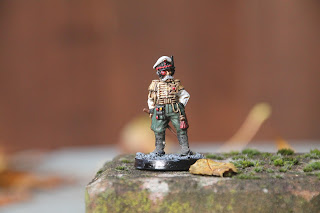 If he has faults, then a certain amount of pride, perhaps not unjustified, can sometimes rub people, whose contribution to the war is not as formidable as Jornath's, up the wrong way.  He can become exasperated with people who are not following the correct procedure.  However, of course, he is normally surrounded by a staff of Jornathi officers who make sure that his ire is never normally aroused.  Of course the friction of war means that there are unfortunate occasions when he has shot subordinates;  But life in the Guard holds no certainties, no matter who you are or where you work.
Posted by Zzzzzz at 02:43