Deep Joy. It rained last night so today I am auditing in mud.

This is the refinary/processing plant; water, promethium, whatever. Again there is a 1st edition guardsman to provide an idea of scale. The central isle is big enough to take a Leman Russ (MBT). The original idea was to have some kind of high level gantry as well. 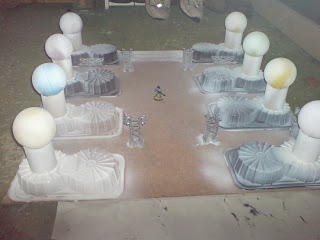 The issue with the gantry idea is that most of the 'sides' I'm preparing have a squad size of ten models for their basic troop types. So the gantry, to be of much use would have to take ten models, which may well make it look not so much like a gantry, more like a landing pad. The squad coherancy rules are 2" between models. To avoid all dying at once to blast and/or template weapons, it pays not to bunch up. So we end up needing a 'gantry' the size of a pizza box. Which is fine, but entirely obscures the carefully constructed terrain masterpiece below. 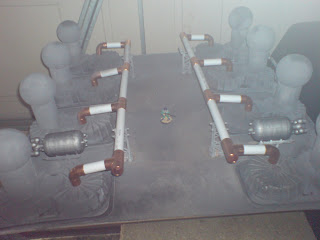 The same peice with more pipe, a little more detail and a lick of grey paint.

So at the minute there may well be a gantry, but it will be more like scale gantry size, (urban mammoth platformer set sort of thing,) making it less use to full size squads. No matter. I'm sure we'll cope.

Moving on again: I found another four incubi. So this week I'm up to eight incubi, eleven DE Jetbikes, three Raiders and a Ravager. The gunners on the Ravager came without arms. I telephoned GW and they're sending me another one. And I make ten DE warriors yesterday. Twenty DE warriors and one Ravager to go. (two Ravagers, including the one that they are sending me). And then that'll be the DE ready to undercoat. Woo-Hoo !
Posted by Zzzzzz at 08:44