Weekend working - usually quiet, seems to only be pressure testing and one ecavation today

These are GW 1st edition Imperial Guard. ie Dating back to when they were the imperial army; Officers and commissars had jet bikes, their vehicles were rhinos and land raiders and they had jump pack and beastman assault squads. Proper stuff. These boys, being painted already, are last on the list for touch up. They need one, my intention is to base them for the campaign and then improve the paint job as time allows. They are being reinforced by the very occasional cadian as well as a sprinkling of Urban Mammoth's Viridians. 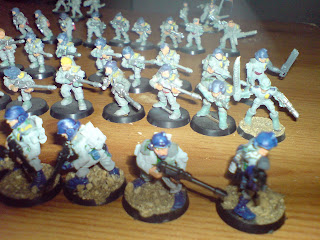 I had a good night, last night - six viridian snipers turned up, along with two viridian HMG teams (I've cut off the HMG and replaced with HB, putting them on to 60mm bases). The snipers are for the Cadian Recce unit and the HB teams are for the Devos IV 2nd "Loyal" PDF Infantry Regt.

Also managed two Chimera, one DE jetbike and the last defiler. My normal rate is one vehicle or ten foot soldiers. So feeling quite pleased about that.
Posted by Zzzzzz at 09:48